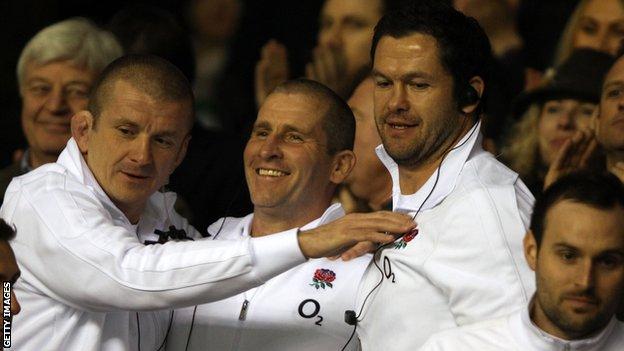 Saracens and the Rugby Football Union have opened "cordial and constructive discussions" over the future of coach Andy Farrell.

Lancaster was named permanent head coach on Thursday and is expected to want to retain Farrell's services.

Saracens confirmed the RFU has instigated talks, but said "Andy is a big part of our club and our future".

Chief executive Edward Griffiths told BBC Radio 5 live that part of Saracens agreeing to allow Farrell to work with England initially had been on the basis that it was a temporary arrangement.

"The RFU asked if they could loan Andy Farrell for the Six Nations, which we did in the national interest," said Griffiths.

"They made it very clear that it was just for the Six Nations.

"He is contracted to us for another two years and he is a massive part of what we're planning here as a club, and that's really the situation."

In a statement the club added: "The club will not provide a running commentary on this process and will make no further comment until the deliberations reach a conclusion."

He was loaned to England as a backs coach for the duration of the Six Nations to join Lancaster and forwards coach Graham Rowntree.

The trio led England to victory in all but one of their matches at the tournament and, following Lancaster's appointment, Rowntree is expected to be confirmed as part of the full time set-up.

"We've sold over 80,000 tickets," he explained. "I think the crowd is nearer 90,000 so we're going to come very close to selling-out the national stadium which would make it a fantastic day."