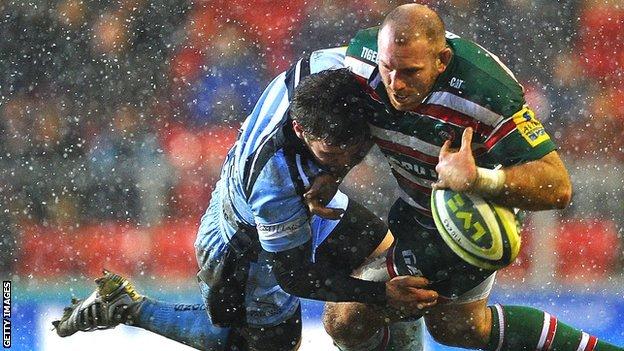 Hawkins has played 12 times for Tigers this season and impressed in the club's victorious LV= Cup campaign.

But the 28-year-old suffered a broken elbow in the final against Northampton in an incident which saw Calum Clark cited by the Rugby Football Union.

Rob got an opportunity to play and prove himself...and that has been cut short and hampered

Director of rugby Richard Cockerill told BBC Radio Leicester: "Rob is our player. He got injured for us and we'll look after him. He's a good player."

Hawkins had surgery on Monday and is expected to be ruled out for the rest of the season.

Cockerill added: "We are waiting for the letter from the specialist to see the damage and what the expected return to play is. It will be 10 or 12 weeks at least and may be a bit longer so we'll just have to see."

But Cockerill said there was never any doubt Tigers, who do not release details about length of new deals, would honour their contract offer.

"We verbally agreed a contract a few weeks ago which hadn't been signed," he added. "Since then he's signed that and I have signed it.

"Rob got an opportunity to play and prove himself and what's the most disappointing thing is that now that has been cut short and hampered by what was a pretty avoidable incident."