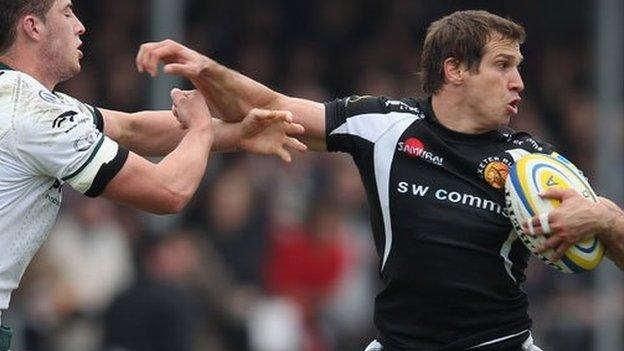 Exeter Chiefs ran in a try in each half, Gonzalo Camacho getting his first for the club, to see off London Irish.

James Hanks went over for the Heineken Cup spot-chasing Chiefs to give the hosts a 10-point lead at half-time.

Irish came right back into it with Tom Homer's try but winger Camacho eased the Chiefs' worries when he went over.

Exeter's victory could have been more comfortable but fly-half Ignacio Mieres missed five penalty kicks and one conversion attempt.

The Chiefs applied the early pressure and Richard Baxter made an excellent break, with the ball being worked across field and outside centre Bryan Rennie, who just failed to squeeze in at the corner.

Exeter's pressure was rewarded when Baxter set up a drive to the line and Hanks went over for his first try of the season from close range.

Irish hit back when a clever grubber kick allowed Homer to collect wide on the left and dot down in the corner.

Exeter were stung into action and, after a series of phases, Camacho collected the ball at speed and went over for his first try for the club.

"Every Premiership win is very important and hard fought so you take the points when you can. I thought we showed tremendous endeavour, but we also missed gilt-edged opportunities.

"We did miss a couple of opportunities to run in tries and we did fail to collect points through Ignacio Mieres' boot, which is quite unusual for us. If those had come off then it would have been a relatively comfortable win.

"London Irish have enough quality and enough game-breakers in their team to really hurt you, but we kept them out of the game by playing ourselves. We have just got to keep getting better and taking the opportunities.'

"I think that we can look towards a Heineken Cup place now because we would have to have a pretty poor run of games, and the results go the way for other teams, for people to go above us.''

"We can look at missed opportunities having been inside their 22 three times in the last seven minutes and you have to come away with things. We went for broke and last week against Leicester it cost us, and it cost us again this week.

"If you said that you could get a losing bonus point away to Exeter you wouldn't have been too disappointed. But you are always a little disappointed when you've seen opportunities to get more.

"We need to be a little more clinical and manage the game better, but those are just the little margins. Again we are on the wrong side of the scoreline and that has happened too often. We've got to seriously look at it because it is not from the lack of effort.''