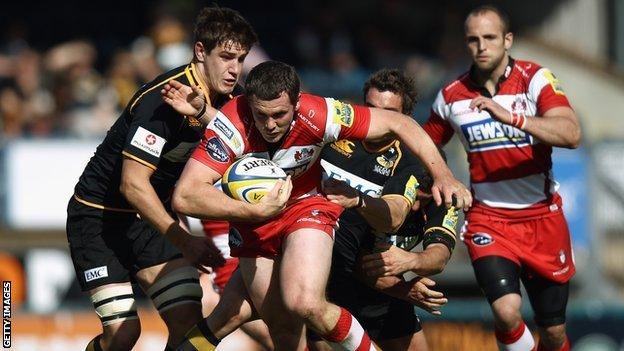 Nic Berry scored a try for the hosts early on before Scott Lawson crossed for the Cherry and Whites.

After Nicky Robinson kicked over his second and third penalties, Hugo Southwell's try put Wasps 23-10 ahead.

Gloucester then fought back to move a point ahead with tries from Charlie Sharples and Akapusi Qera before Daly's kick handed victory to the hosts.

The centre had been handed what proved to be the vital kick after Robinson missed four chances with the boot and Daly's successful attempt left Wasps eight points clear of bottom side Newcastle.

Robinson had opened the scoring with a penalty before Berry burst through the Gloucester defence to score the first try of the match, which Robinson converted.

Burns notched Gloucester's first points of the afternoon with his second penalty attempt before setting up a try by putting James Simpson-Daniel through the gap to send Lawson over.

After Burns had added the extras, Wasps opened up a 13-10 lead at the break through Robinson's second penalty.

The Wasps fly-half was on target again before Berry broke out of his own half and fed the ball to Tom Prydie, who then set up a try for Southwell, which Robinson converted to leave them leading by 13 points.

Gloucester soon responded as clever interplay from Luke Narraway and Nick Runciman handed Sharples the chance to cross, with Burns adding the extras.

The visitors took the lead with 15 minutes remaining when Hendry Trinder sent Qera through and Burns' conversion gave the Cherry and Whites a one-point lead.

But, after Robinson had failed with two penalty attempts, Daly stepped up to secure victory for Wasps and leave Gloucester with the consolation prize of a losing bonus point.

"The game has put three to four years on me. We won it four times and lost it three.

"We were in a commanding position at 23-10 but then we tried to commit suicide.

"We kicked poorly and allowed them to get their offload game going. I thought the game was up when Nicky Robinson missed those penalties but Elliot's kick was massive for us and gives us a bit of a cushion in the relegation battle."

"I'm very frustrated. We don't seem to have the composure and understanding to close out a game, we try to play too much in our 22.

"Certain parts of our game are not good enough and that's about five times this season we have thrown away games in the last five to 10 minutes.

"We didn't play massively well but should have won the game and it's another one that has slipped away from us."