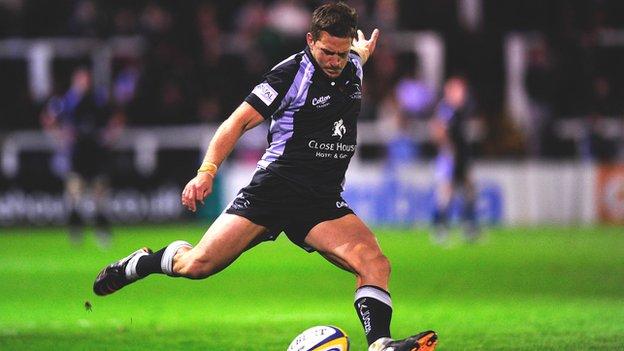 The visitors scored first-half tries through Johnny Leota, James Gaskell and Rob Miller, with Gopperth kicking four penalties at the other end.

Gopperth kicked the extras to level the scores and won the game with four minutes to go with a penalty kick.

With Dean Richards, who takes over from Gary Gold as Falcons director of rugby next season, watching from the stand, the Falcons stretched their unbeaten home run to five games.

The Newcastle fly-half had given the hosts the lead with a first-minute penalty, but Sale hit back with two tries in eight minutes.

Srum-half Dwayne Peel had a hand in them both, with Johnny Leota and James Gaskell going over to give the visitors a 12-3 lead.

Gopperth then successfully kicked two penalties, hit the post with another, and put one wide as Sale conceded four penalties in eight minutes.

After Newcastle had a try ruled out by the fourth offcial, Rob Miller ran in Sale's third and Gopperth's penalty closed the gap to seven at half-time.

Swinson drove over for Newcastle's only try in the 53rd minute and Gopperth levelled the scores at 19-19 with the conversion.

The New Zealander then missed a 68th-minute penalty, had a drop goal attempt charged, down before calming slotting over the posts with four minutes left, as Newcastle cut the gap on Wasps at the bottom of the table to only four points.

"We were poor in the first half. We gave them possession in soft situations and we dropped the ball a lot and they are a great side from broken field ball. But, given the situation we are in at this stage of the season, we said we had to stick to our guns and hold on to the ball and back ourselves.

"The biggest thing was the character shown tonight. At 19-12 down we were staring down the barrel and it would have been easy for the guys to give up but they didn't.

"I'm now looking forward to Gloucester and we have to make sure we have to hold on to the ball better and then get the balance right."