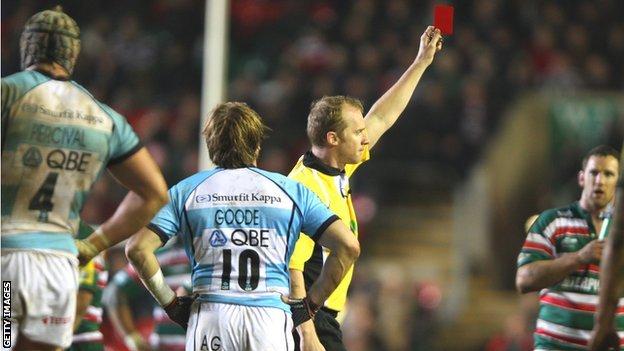 Andy Goode was sent off as Worcester Warriors crashed 43-13 at Leicester, who scored seven tries to go second in the Premiership.

Scott Hamilton, George Chuter and Tom Croft all went over as the hosts had a 17-3 half-time lead.

Tom Youngs and George Ford added the gloss for a seventh successive win in all competitions, before Ceri Jones scored a late consolation try.

The Tigers, who have scored more tries than any other club in Europe this season, were up against a try-shy Warriors, who have crossed the line only 16 times in Premiership action in 2011-12.

Worcester put the first points on the board when former Leicester player Andy Goode kicked a monster penalty from near halfway. Play was them held up while medics treated Warriors lock Chris Jones.

Tigers looked scrappy in the opening stages, but a fine cross-kick from Toby Flood saw Hamilton go over in the right-hand corner, although Flood missed the extras.

Moments after having a try disallowed, the Tigers scored their second try when Chuter grabbed a loose ball from the floor, but Flood again missed the conversion.

Goode, who was earlier shown a yellow card for killing the ball on his own try line, was then shown a straight red for a flying shoulder charge on England flanker Croft.

Moments later, Croft finished off a neat Tigers move to score in the right corner, with Flood kicking his first points for a 14-point half-time lead.

Just like the first half, Worcester scored the first points of the second period with a successful penalty from replacement Danny Gray.

Leicester picked up the bonus point as Italian prop forward Castrogiovanni drove over on the left and Flood kicked the extras.

Ed Slater was shown a yellow card for killing the ball to reduce the game to 14 players each for 10 minutes, and Tigers scored again with both sides a man short.

Waldrom went over for his sixth Premiership try of the season with Flood kicking the extras for a third time in a row, while Alesana Tuilagi was sin-binned for punching Ed Shervington.

Youngs and Ford, who had both come on as second-half replacements, also went over, while Jones scored Worcester's first and only try in the last minute.

"It was disjointed and hard to play against a side that did not come to play.

"We were inaccurate for large parts of the game which was frustrating but job done. It's five points.

"We don't want to use up our best performances in games like these, we want to save them for the big ones."

"I don't think many people would have had us down to win at Welford Road. We just wanted to give a good account of ourselves.

"Although we are not mathematically secure yet but we have got two home games and we are unbeaten at Sixways.

"We will regroup and make sure we are at full throttle against Exeter."