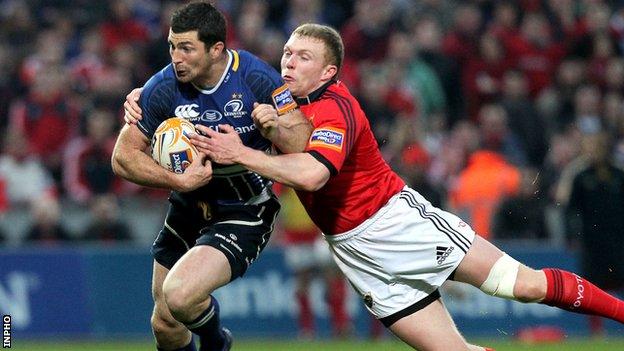 Leinster almost made the perfect start as Sexton's chip over the Munster defence appeared set to be gathered by a charging Rob Kearney but the ball bounced away from the Ireland full-back.

Sexton kicked Leinster ahead in the 10th minute after the Munster scrum had been penalised and the front-row exchanges became the dominant theme in a turgid first half.

O'Gara missed a chance as he hit the woodwork from a penalty but then did level after Sean Cronin had been penalised.

However, Sexton restored Leinster's lead and Munster prop Marcus Horan then incurred the wrath of referee Nigel Owens which handed another three points to the visiting fly-half.

Repeated scrum collapses after the break saw opposing props Ross and Horan both sin-binned by the Welsh whistler.

However, Leinster regained the initiative as Isa Nacewa and Kearney both went close to crossing for a try.