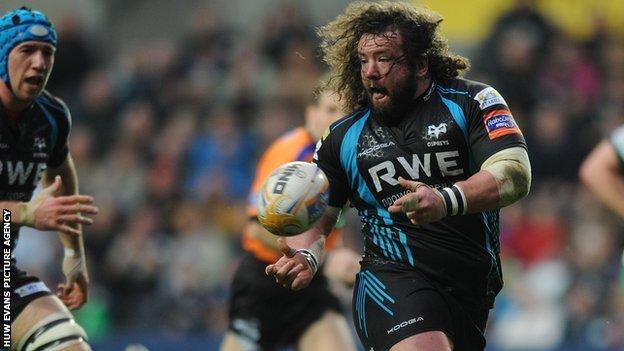 The Ospreys produced a clinical display as they overwhelmed Italian visitors Treviso in the Pro12 League.

The bonus-point win pushed the Welsh region back into the play-off places.

The Ospreys looked to dominate from the off and Biggar kicked the first points of the game after 10 minutes.

Treviso, though, hit straight back with a Burton penalty before the opening try from centre Beck for the home side.

Bigger converted then stretched the Ospreys' lead with a penalty.

And prop Paul James further delighted the Liberty Stadium crowd to give his side a 20-3 lead at half-time.

Beck's second try came just two minutes into the second half but the dominant Ospreys saw their lead reduced with a stunning try from Treviso.

Edoardo Gori ran fully 50 yards, evading a number of tackles before the ball was worked to the wing and the waiting Ludovico Nitoglia who stepped infield to score.

A buoyed Treviso kept the pressure up and what had been a flowing, entertaining game became increasingly fragmented.

But the Ospreys held firm and, when Treviso's Tommaso Benvenuti was sin-binned for a deliberate knock-on, they were able to further increase their lead.

First, Bearman scored a converted try after the Ospreys' powerful scrum forced its way over the line then Isaacs was released on the half-way line, sidestepped a defender and raced away. Biggar again converted to round off what proved a comfortable victory.