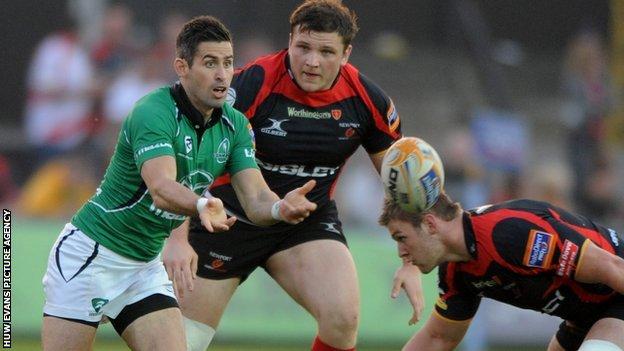 Connacht's Tongan wing Fetu'u Vainikolo scored twice at Rodney Parade as they recorded only their second league win in Wales since 2004.

But it was too little, too late as the visitors recorded their fifth Pro12 win of the season.

The Dragons welcomed Welsh Grand Slam heroes Faletau and Dan Lydiate back and were led by another of the nation's stars in lock Luke Charteris.

But Connacht were more than equal to the challenge as they laid the foundations for victory by a dominant opening period performance.

In the previous round, the Galway-based side made Munster work hard for a 20-16 win.

That good form continued as they denied the hosts possession from the start.

Vainikolo, 27, went over in each half while home fans vented their displeasure at the interpretations of Italian referee Giuseppe Vivarini.

Centre Kyle Tonetti sent Vainikolo away for his first try, the wing racing 35 metres as he beat the cover defence to the corner.

Lydiate's sin-binning for work at a ruck drew more derision from home fans, and Connacht were denied a try in his absence when a cross-kick was taken on the right by wing Tiernan O'Halloran, who was judged to have put a foot in touch before he fed Tonetti.

Robling's third penalty reduced arrears just before the break, but Vainikolo broke free from 30 metres out within seconds of the restart to give Connacht a 24-9 lead.

Robling and Nikora exhanged further penalties as the home side sparked into action, but that brought no tangible reward even after prop Ronan Loughney was sin-binned for deliberate offside at an attacking home ruck.

Connacht were under siege while a man short, but it took until almost the ninth minute of Loughney's absence before Faletau barged his way over.

The Irish region ended with only 14 men after Eoghan Grace followed Loughney to the sin-bin for illegal work at a ruck.

But he and his team-mates were able to celebrate together at the final whistle.