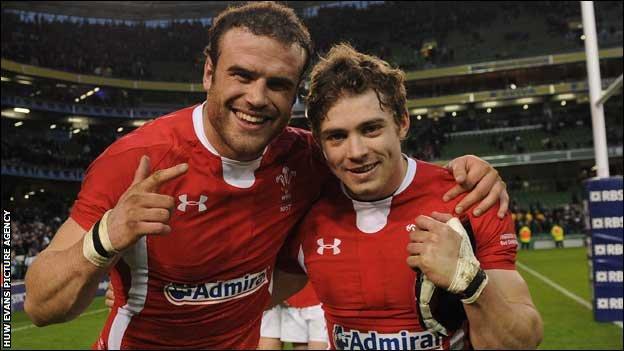 has already confirmed he will join the Welsh exodus to France as the British and Irish Lions prop will join Top 14 side Toulon next season.

Back Halfpenny and Lions centre Roberts are contracted until the summer of 2013 and Baber hopes they stay long-term.

"They will be Blues players next season," insisted joint boss Baber.

"We want to build a team around them supplemented by young players like Rhys Patchell, Harry Robinson and Cory Allen who are all playing under-20s for Wales.

"We want to bed them in around the experienced guys and build a culture - that's how we see the next three or four years for the Cardiff Blues developing on a sustainable basis."

Wales' four regions - the Ospreys, Blues, Newport Gwent Dragons and Scarlets - are operating a £3.5m salary cap from next season and Blues chairman Peter Thomas has warned Wales players at Welsh regions will no longer be paid while on international duty.

Roberts, Lions' man of the series on their tour to world champions South Africa in 2009, and Halfpenny were standout performers as Wales won their third Grand Slam in eight years.

Halfpenny ended the 2012 Six Nations with an impressive 66 points, scoring two tries against Scotland and taking over Wales' kicking duties for the entire tournament for the first time.

But Baber insists his Wales regulars will not follow Jenkins abroad and the Blues will not be tempted even if big-spending French clubs express an interest.

The Welsh region, who play defending European champions Leinster in a Heineken Cup quarter-final in Dublin next month, want Roberts, Halfpenny and Wales team-mates Alex Cuthbert and Lloyd Williams to be their foundation for the future.

Cardiff's third defeat in four league games against Welsh rivals Scarlets on Saturday has dented their Pro12 play-off hopes and Baber admits qualifying for the end-of-season showpiece looks "increasingly difficult" as they trail the top four by six points.

Baber also concedes it is "difficult" knowing a host of their current squad have already announced they are to leave in the summer.