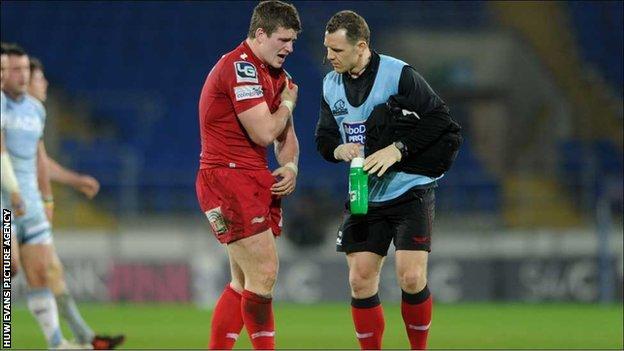 Wales centre Scott Williams will not need a shoulder operation but is still a doubt for the Scarlets' Amlin Cup quarter-final against Brive on 8 April.

Williams was injured in the Scarlets' Pro12 Welsh derby win at Cardiff Blues.

The 21-year-old was forced off in the 31st minute after a challenge with Cardiff's Casey Laulala.

"I think Brive maybe a bit too early, but the shoulder has got a lot better," said Williams.

"I'll try and get back as quickly as possible but I don't want to rush too much and make sure the shoulder is right.

"Had a scan yesterday [Tuesday] - nothing too serious.

"Hopefully I don't need an operation and I can just carry on with having treatment down at the Scarlets and hopefully be back in the next couple of weeks."

At least the Scarlets have plenty of centre cover if Williams is to be out with Jonathan Davies, Sean Lamont and Gareth Maule all fit.

The sixth-placed Welsh region are bidding for their first appearance in the end-of-season play-offs - and trail the top four by just one point.

England's number eight Ben Morgan, who is to move to Gloucester next season, was also replaced by the Scarlets before half-time in their 26-14 win over the Blues on Saturday.

But Scarlets boss Nigel Davies insisted after the Blues game Morgan's substitution was "more of a precautionary measure" as he was suffering from a tight hamstring.

Wales fly-half Rhys Priestland did not play against the Blues as the Scarlets allowed the 25-year-old to rest his knee injury.

"Rhys did have a problem with his knee," said Davies.

"And the advice is if we give him a week off then he should be fine."