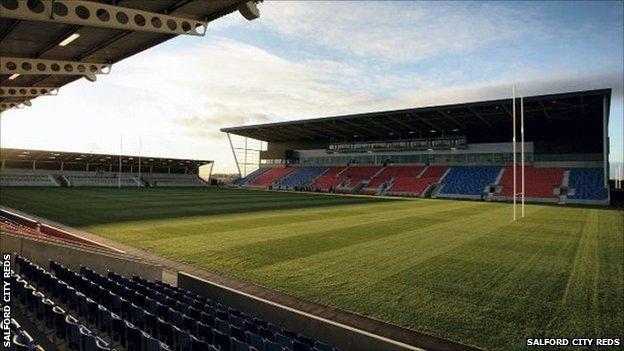 Sale Sharks have confirmed they will groundshare with rugby league side Salford City Reds from next season after signing a 25-year lease.

The Sharks will leave Edgeley Park in Stockport, where they currently play, for the new City of Salford Stadium in Barton, which has a capacity of 12,000.

"This is a tremendous move for Sale," said Sharks co-owner Ian Blackhurst.

"The first-class facilities will provide a great platform as we aim to become one of the top sides in Europe."

The move has also been welcomed by Super League club Salford, who moved from their old ground, The Willows, at the end of last season.

"It is a real boost for the city of Salford to have an elite club from both codes within its boundaries," said chief executive David Tarry.

The Sharks moved to Edgeley Park in the summer of 2003 from their original home at Heywood Road.

The move saw a merger with Stockport County, who were then in the Football League but now play in the Blue Square Bet Premier, as Brian Kennedy took over both clubs.

Kennedy later relinquished his interest in County and, although there had been rumours the football club may leave their home of 110 years, Blackhurst has confirmed that Stockport will continue to play their home matches at Edgeley Park.

Both Premiership club Sale and Salford have previously spoken about the possibility of the move, with Reds chairman John Wilkinson and Sale co-owner Kennedy wanting the groundshare to go ahead.

Salford moved into their new £26m home at the start of the new Super League season, although crowds have been lower than anticipated.

They are currently attracting attendances of about 6,000, around 2,000 down on the club's expectations at the start of the year.

Although the City of Salford Stadium was scaled down from initial plans, the capacity can be increased from 12,000 to 20,000 with further development.