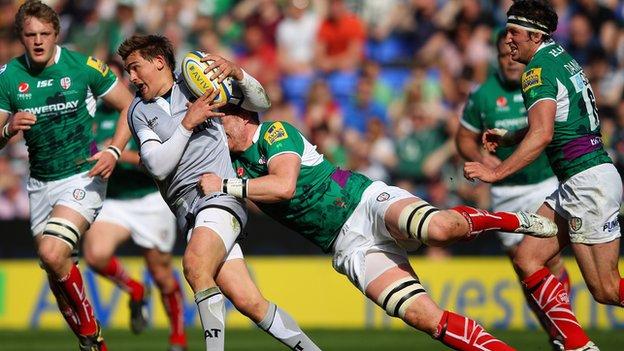 Leicester fly-half Toby Flood scored 26 points to take the Tigers up to third in the Premiership with a bonus-point win over London Irish.

Exiles took a six-point lead before tries from Flood and Julian Salvi got the Tigers into the game but Bryn Evans replied to put the hosts in front.

Tom Homer's solo try gave Exiles hope after the break before Manu Tuilagi went over for the visitors.

Flood and Homer exchanged penalties before Tom Croft pounced at the death.

Irish reaped early rewards down Leicester's short side and, despite having all the territory in the opening quarter, had only a solitary Homer penalty to show for it.

Welford Road-bound Dan Bowden doubled the Exiles' lead on the half hour with a drop-goal as referee Dean Richards played advantage.

The score sparked Tigers into life and they produced 15 flawless phases to take them up to the hosts' line.

After a series of five-metre scrums, Ben Youngs eventually fed Flood, who ghosted over from seven metres out, but the fly-half was ponderous with his conversion, charge down by Darren Allinson.

Salvi touched down after Thomas Waldrom almost went over and Flood made no mistake with the extras.

A collapsed scrum saw Homer step up to put Irish within three points and Evans' try came from a line-out, where Irish impressed, after Allison burst through Leicester's forwards before finding his lock in support.

Homer added the conversion and Youngs was lucky not to leave the field just before half time for punching Jamie Gibson in front of the touch judge.

After Flood put Tigers back in front from the tee Homer showed great acceleration to cross under the posts after some poor defence.

Billy Twelvetrees exposed disjointed defending at the other end to set up Tuilagi.

Homer and Flood exchanged penalties as the lead swapped hands twice in the final minutes and, while Irish kept the ball alive in time added on, Croft pounced on a loose ball to give Tigers the five points and deny the hosts anything.

"We played some good stuff but some horrendous stuff.

"We soaked up early pressure and then I thought we were going to take control, but we were too inaccurate against a side who have the pace and power to punish you."

"As a neutral the game was an outstanding spectacle. After 78 minutes we had our noses in front and I thought it was going to be a Cinderella moment for us."