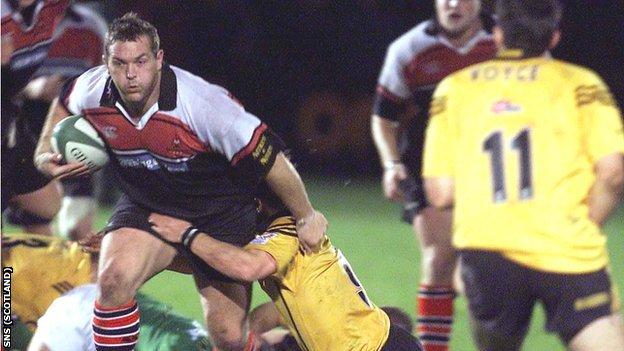 Former Scotland A forward Matt Taylor will replace Graham Steadman as Scotland's defence coach at the start of next season in a three-year deal.

Head coach Andy Robinson described this latest part of his coaching shake-up as a "coup" for Scottish Rugby.

Taylor, 39, will leave Queensland Reds and, in addition to his national team role, will assist Gregor Townsend when he takes over at Glasgow Warriors.

"He is someone who is passionate about Scottish rugby," said Robinson.

Taylor, who helped Queensland Reds to the Super XV title last season, has agreed a deal that will take him through to the 2015 Rugby World Cup.

He said: "There is a long and proud tradition in Scottish rugby and to be part of that is not only a great honour but a huge opportunity.

"To be embarking on a new journey is exciting, but to do so in Scotland is especially pleasing having already experienced first-hand the passion for which the nation has for rugby.

"I've got many fond memories from my time in Scotland and I'll be looking forward to adding many more.

"At the Queensland Reds we based our success around the defensive side of the game and replicating that in Scotland, where fans recognise the team for their defensive nous, will be critical to my role and to the overall success of the team."

News of Taylor's appointment follows Monday's announcement that Sean Lineen will be replaced by Townsend at Glasgow in the summer.

Lineen will take up a new post of head of player acquisition in addition to coaching the Under-20s team.

In December it was announced that Australian Scott Johnson would be leaving Ospreys to become Robinson's senior assistant in time for Scotland's summer tour of his homeland, Fiji and Samoa.

Taylor qualified to play for Scotland through his Fife-born parents. After a playing stint with Aberdeen GSFP, he joined Edinburgh Rugby in May 2000 and transferred to the Borders two years later.

He represented Scotland Development XV and Scotland A in their victories over Tonga and Argentina in November 2001 and returned to A duty in the win over Italy A in February 2002.

Robinson added: "I'd like to pay tribute to the work undertaken by Graham Steadman who is moving on from the Scotland defence coach role.

"I believe Matt Taylor's appointment is a coup for us. His record with Queensland Reds and the esteem in which he is held speaks volumes about what he will bring to his new role."