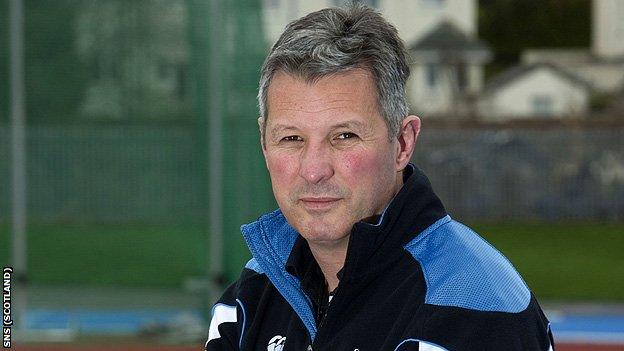 Glasgow Warriors coach Sean Lineen admitted to being taken aback by Scottish Rugby's decision to replace him in the summer with Gregor Townsend.

New-Zealand-born Lineen, who has been Warriors coach since 2006, will become Scottish Rugby's head of player acquisition, a newly created role.

"The change has been made from the top," the 50-year-old told the BBC.

"The timing took me by surprise. That's the way it goes; it's professional sport, coaches come and go."

Townsend, 38, presently assists Scotland head coach Andy Robinson as attack coach and will join the RaboDirect Pro12 outfit at the end of the season as they move across the city from Firhill to Scotstoun Stadium.

Lineen will move in the opposite direction, the 50-year-old former Scotland centre moving to Murrayfield to help recruit and develop players for Warriors and Edinburgh as well as coaching the nation's Under-20s.

Warriors have had a fine season so far in the Pro 12, sitting in fourth place in the table and in line for a place in the end-of-season play-offs.

However, they missed out on qualifying for the latter stages of the Heineken Cup after finishing a distant second behind Leinster in their four-team qualifying group.

Townsend revealed that he had discussed his coaching career with Scottish Rugby and was keen to get started next season.

"I'm really grateful for the opportunity. It's a great position to come into," he said.

"To start as a head coach of a club in Scotland is fantastic.

"I understand the privilege of that position and the responsibility that I owe to the supporters and the players."

And he added: "Glasgow have developed a tough, competitive group of players; they are very hard to beat.

"All credit to the coaching staff and players who have been performing really well.

"They have a huge chance of success at the end of this season.

"I believe that I can take this team forward to be one of the strongest teams in Europe."

Talking of his change of role, Lineen said: "It is one of these decisions - what do you have control over?

"We're a small country with only two pro teams. We need to make sure it's all for the good of the game.

"There's never a good time [to leave]. We have a big push for the play-offs.

"It's all about what we do now. From now it's doing the Glasgow Warriors jersey justice.

"I spoke to the players this morning and it was all about Glasgow. They are hell-bent on getting in to those play-offs."

The Warriors switch is a further change to the coaching set-up in Scotland.

Robinson had already announced that Ospreys coach Scott Johnson would be joining his Scotland coaching team as senior assistant in the summer, with defence coach Graham Steadman's contract not being renewed.

Lineen told BBC Scotland that he was excited about the new role "once I got my head around it".

"There's so much that we can do to make Scottish rugby as strong as possible," he said.

"I enjoy identifying talent and working with it and seeing it come to fruition.

"It's a global role, though it's first and foremost in Scotland and in England with the exiles.

"If you look at the England team at the moment and the likes of [Mouritz] Botha and [Manu] Tuilagi.

"If the teams with that many players are looking all around the world, then we need to be doing that as well.

"It's about getting a network in place. It's all about selling Scotland and Scottish rugby to players around the world.

"That will be a bit of a wrench [leaving Glasgow] but I'll still have a role with the Under-20s.

"I wish Gregor all the success and I will be supporting him."