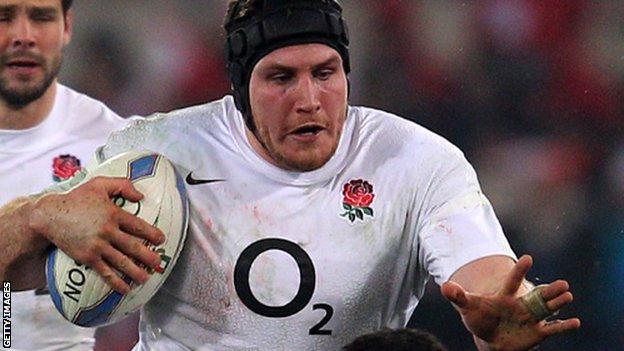 Ben Morgan will leave Scarlets at the end of the season to join Gloucester on a three-year contract.

The 23-year-old still has a year to run on his current deal and Gloucester have paid an undisclosed fee to bring the England number eight to Kingsholm.

"He's only scratched the surface of where he can go to."

Bristol-born Morgan was educated in Gloucestershire and started his career at Dursley before spells with Cinderford and Merthyr RFC, and played for both Cardiff Blues and Gloucestershire at under-20 level.

He signed for Scarlets in 2009 and has made 45 appearances for the Pro12 outfit.

Morgan was eligible to play for Wales at international level, having lived there for more than three years, but he opted to join the England set-up and made his debut as a replacement against Scotland in last month's Six Nations clash.

"It has been a staggering season for me and I feel privileged and honoured to have been able to represent both the Scarlets and England," added Morgan.

"I'm grateful for the opportunities handed to me by the Scarlets to play the top-flight club rugby which led me to international selection and my dream to play for England.

"As a proud Englishman, I feel it's best that I now take my club career forward within the Premiership and my home country and I am pleased to be joining Gloucester next season as a club with similar values and ambitions as the Scarlets.

"I want to express my sincere thanks and appreciation to the coaches and back-room staff at the Scarlets who've been a huge influence and support and helped me achieve so much in a short space of time. So much credit should go to them for what I have achieved.

"It's been a brilliant three years at Scarlets and living in Llanelli where the supporters have been so loyal, welcoming and supportive."