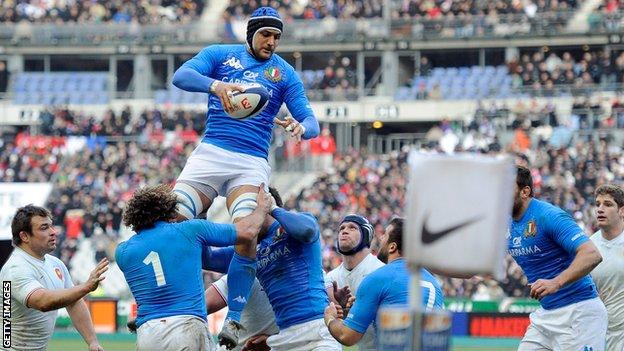 Italy coach Jacques Brunel has brought back experienced duo Marco Bortolami and Gonzalo Canale for their Six Nations clash with England on Saturday.

Brunel wants his side to cut out the individual errors that led to their opening 30-12 defeat to France.

"We cannot continue to have this level of individual performance in defence but collectively we're in a good place," said the Frenchman.

Brunel has recalled lock Bortolami and inside centre Canale at the expense of Cornelius Van Zyl and Alberto Sgarbi, who do not even get a place on the bench.

But he is keen to give youngsters an opportunity so there are replacement spots for Antonio Pavanello and the uncapped Luca Morisi.

"I want to keep the spine of the team. I could change a few things but little by little so we keep our shape," he said.

"We have to give a chance to some youngsters to make their debut at this level but we'll start with them on the bench and then we'll see."

The Azzurri displayed a more attacking approach in their defeat to France - something former Perpignan coach Brunel is keen to build on.

"If you don't just look at the score, we had the ambition to create something and impose something on our opponents and not just be in a position of waiting, and I think we did that," he said.

"We had the chance to really get back into this game and make it close but we didn't manage that and unfortunately the counter-attacks pushed the score out.

"But that's normal in a first game like this. With the spirit we showed I cannot completely have regrets, I liked the spirit."