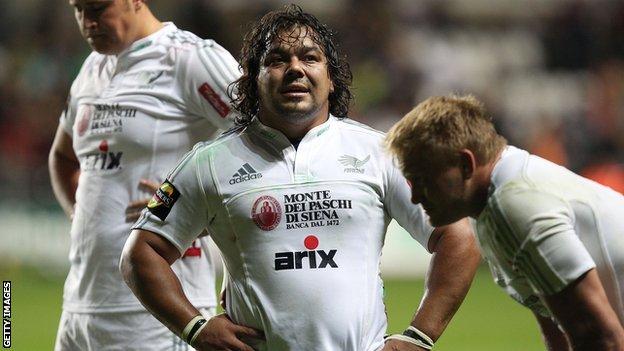 Edinburgh have signed Argentina prop Ulises Gamboa from RaboDirect PRO12 rivals Aironi until the end of the season.

Another Scottish prop, Lewis Niven, is sidelined by injury.

"He'll provide valuable support for the squad until the end of the season, when we'll reassess his place at the club," said Edinburgh coach Michael Bradley.

"Ulises is a prop of considerable experience, having been capped for one of the set-piece powerhouses of world rugby.

"Edinburgh Rugby provide more players [nine] to the Scotland national team than any other club and, while it's great for the players, the club and its fans to have such strong international representation, the availability of Ulises is welcomed at a time where we look to reach a place in the RaboDirect Pro12 that reflects our performances in the Heineken Cup."

Gamboa, who has been capped eight times, is available for Edinburgh's home match against Ospreys on Friday and will also be added to the squad for the Heineken Cup quarter-final against Toulouse in April.