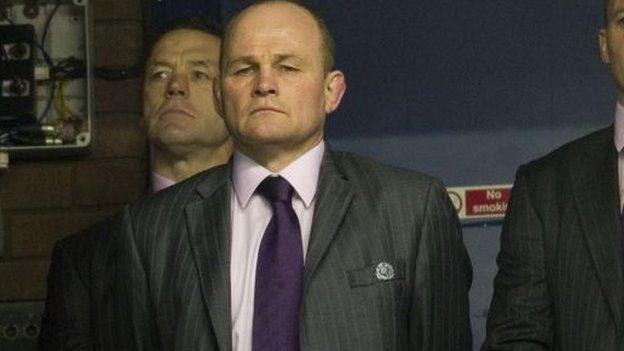 Scotland coach Andy Robinson believes failure to build on a half-time lead cost them in the 13-6 defeat by England in their opening Six Nations fixture.

The Scots surrendered a 6-3 advantage as England's Charlie Hodgson crossed the line and Owen Farrell's eight points left them ruing their chances.

"That's the nature of the sport, we've got to be able to deal with it."

Hodgson's charge-down try at the start of the second half plus eight points from the boot of debutant Farrell left Scotland chasing the match at Murrayfield as England withstood a wave of pressure from Scotland.

After half-time we had a poor bit of play and we gave England the lead. They got their heads up and they managed to win the game

Dan Parks landed two penalties but squandered his clearing kick to hand Hodgson and England a try early in the second half.

Robinson said he was not critical of his players despite conceding that they handed England the advantage.

"It's important that we stay together," said Robinson. "Everybody is very frustrated by the loss.

"After half-time we had a poor bit of play and we gave England the lead. They got their heads up and they managed to win the game."

Robinson praised the performance of No 8 David Denton who won man of the match and said all attention would now be focused on the task against Wales in Cardiff next Sunday.

"David played really, really well, " said Robinson. "I'm pleased with Lee Jones on his first start and Greig Laidlaw came on and gave some width to our game.

"We're hugely disappointed by this, but we'll look forward to next week.

"It should be a cracking Test match in the Millenium Stadium."

Denton echoed Robinson's thoughts on the defeat and was pleased to earn his debut at Murrayfield, but insisted that Scotland need to cut out the problems in their attack and defence if they're to start racking up the victories and build confidence.

"First of all, it's very disappointing to get the loss," said Denton. "It was an incredible game for me to get my first start in the Six Nations, but unfortunately we didn't win.

"We made a few small errors in the red zone in attack and defence, and we need to work on those next week.

"There's positives to take from the match, but at the end of the day, we need to get wins.

"It's great to get man of the match, but first and foremost, we need to get a win."