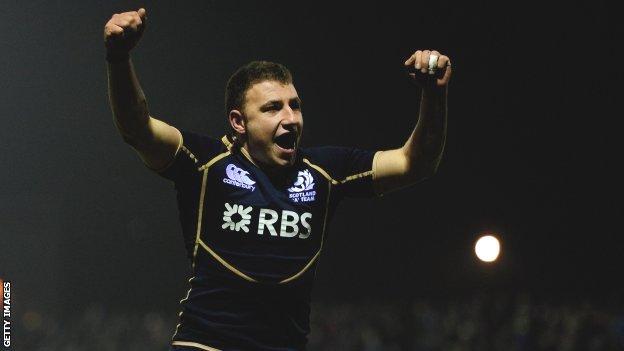 Scotland A ran in four tries as they beat England Saxons 35-0 in Galashiels.

Fly-half Duncan Weir kicked three conversions and three penalties to add to a second-half try in his 20 points as the home side dominated.

Glasgow full-back Stuart Hogg raced over from 60m to help Scotland A take a 13-0 lead in a first half that saw England's James Gaskell sin-binned.

Ed Slater was sin-binned for the Saxons in the second half, while Rory Lawson and Matt Scott added further tries.

"It was a bad day at the office," he admitted. "There was plenty of desire and commitment but we never really generated much momentum and when we did make errors they were expensive ones.

"When you make a few mistakes and you're behind on the scoreboard maybe you try and force things a bit, try some individual things that don't come off and before you know it you're even further behind."