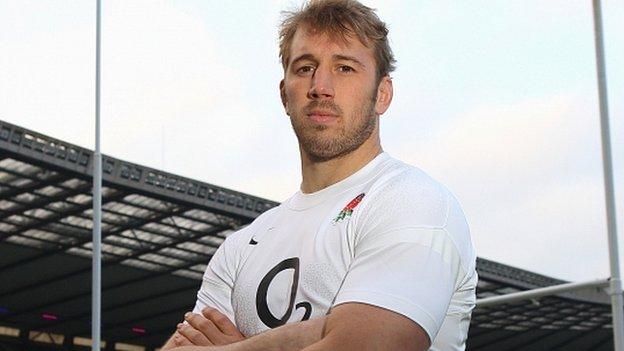 Chris Robshaw insists England's young players will not be daunted by Saturday's Six Nations opener against Scotland at Murrayfield.

Robshaw, playing in only his second Test, leads a new-look team featuring three debutants in the starting XV and five uncapped players on the bench.

"Playing at Murrayfield is never going to be easy but it is something we are looking forward to," said Robshaw, 25.

"The young guys want to go out there and prove a point."

Saracens back Owen Farrell may have been fast-tracked into the England side but interim coach Stuart Lancaster's first team includes several players who were repeatedly overlooked by Martin Johnson.

Robshaw's omission from England's World Cup plans baffled some members of the squad while it has taken Northampton flanker Phil Dowson six years to graduate from the second-string Saxons.

Meanwhile, wing David Strettle, fly-half Charlie Hodgson and full-back Mike Brown have all had their England careers revived by the new regime.

And Robshaw is convinced the hunger that has burned inside all his players will stand them in good stead amid the "chaos" that Scotland coach Andy Robinson said he had planned for them.

"To come up here [to Edinburgh] in your first Six Nations appearance is special."

England have not won at Murrayfield since 2004 but assistant coach Andy Farrell is relishing the challenge.

"Is it hostile? It's a great place to play. I think it's exciting more than anything," said assistant coach Andy Farrell.

"It is one of the theatres of world rugby. It is a dream to get your first cap, and to do it in a Calcutta Cup game here at Murrayfield, with such history, is extra special."

"We have got a lot of young guys in our side, but guys who have been playing in massive matches of late," said Farrell.

"Chris is captain of a side at Harlequins that are right at the top of their game.

"We will be ready for any type of game that Scotland throw at us.

"I wouldn't say we are that confident that we have made any T-shirts yet, but the guys have belief from how tight they are."