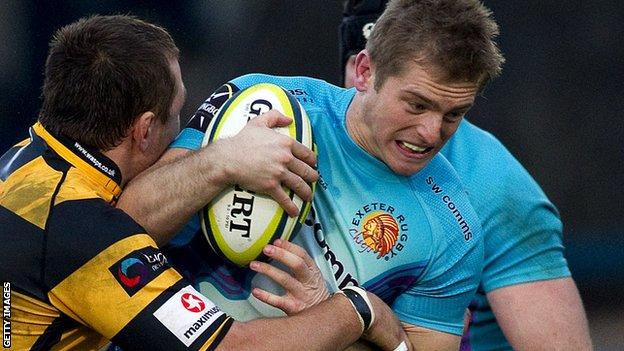 Exeter Chiefs fly-half Gareth Steenson says it is important that his side focus on their own performance in the LV= Cup against Bath on Sunday.

Exeter are second in the group, a point off Northampton, and if Saints get a bonus point they will win the pool.

"We just have to go out and put in a good performance here at Sandy Park against Bath," Steenson told BBC Devon.

"We've no control over what Northampton do so it's not really for us to be worrying what happens the day before."

And Steenson says it is important that Exeter, who are likely to stick with the second-string side that beat Wasps last week, are ready to pounce should the Saints slip up.

"It's an opportunity to get into the Heineken Cup so it's well up there," he said.

"It's also an opportunity for a lot of guys who don't play a lot of rugby sometimes. It gets guys who are coming back from injury a good hit out.

"It's very competitive competition and we are still in the hunt for it and we need a big performance against a strong Bath side."

And Steenson, who has seen his place at number 10 taken by first-choice Ignacio Mieres for much of this season, says he wants to make another good impression on the Exeter management.

"I maybe haven't played as many games as I'd have liked this season but definitely whenever I've played I've been pretty happy with the way things went.

"Last weekend I kicked all my goals so I was pleased with that. Whenever I get an opportunity I've got to take it when ever it comes," he added.