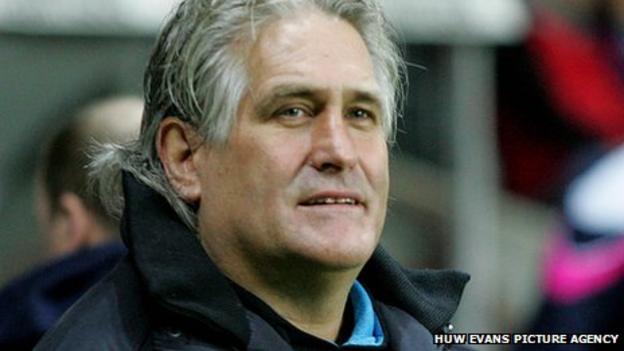 Ospreys director of coaching Scott Johnson has confirmed he will remain at the region until the end of the season.

Johnson will leave the Ospreys at the end of the current campaign to take up the role of Scotland senior assistant coach.

Former Wales captain Jonathan Davies believes the Australian should leave straight away but Johnson has said he will work out his contract.

"My intention is to fulfil my commitment," said Johnson.

"This region's really important to me. And the best thing you can do for your employer is to tell them early. It gives them time.

"What we are trying to do is for the best interest of the Ospreys. I go to work every day and give it my best shot with a clear mandate."

And Johnson believes the Ospreys' policy of develop coaching talent is essential for the region's sustainability.

"Their development's been first class for me," said Johnson of Holley and Humphreys.

"Our whole commitment is to try to get guys through our system here into the Ospreys. There's a coach development pathway through the Ospreys, that's one of the mandates here.

There's some quality nines around in Wales but he's [Rhys Webb] got all the gifts. He's made for Test rugby

"You could question the national body [WRU] and their ability. After Warren [Gatland] who is going to take over?

"I think part of your mandate is to try to get sustainability within your own organisation. One of the big things is that we're trying to get that.

"The development of just not those two [Holley and Humphreys] but people underneath is substantial."

Johnson said he was delighted Ospreys youngsters Justin Tupric, Rhys Webb and Ashley Beck have been included in Wales' training squad for the Six Nations.

The trio have been named in a 35-man squad which will spend a week in Poland, starting on Sunday.

"I'm tickled pink they are in because they're good people," said the former Wales caretaker coach Johnson.

"Justin Tipuric has got every set of skill you could want from a seven," added Johnson.

"To me he's a perfect blend between a Martyn Williams and [Sam] Warburton. He's got all the skills Martyn has and is probably not as big as Warby but he's as fit and he's got heart.

"What more do you want from a seven? He reminds me sometimes of a French type seven that can do a lot of things. He's a wonderful player and more importantly he's a wonderful lad."

Johnson said Webb and Beck had improved as players during his three years at the region, adding they had the talent to thrive on the international stage.

"There's some quality nines around in Wales but he's [Webb] got all the gifts. He's made for Test rugby, make no bones about that.

"He's [Beck] started to emerge and he's a true 12 for me and I like him for that. He's got wonderful feet but he's a beautiful passer of a rugby ball."