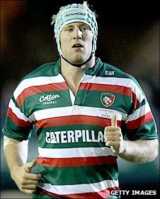 Leicester Tigers number eight Jordan Crane has been ruled out for the entire 2011-12 season after having surgery on an ongoing knee injury.

Director of rugby Richard Cockerill told the club website: "It has got to the point where he can't continue.

"We have had to have the wear and tear repaired and he will miss the season."

Crane, 25, captained England Saxons to Churchill Cup glory this summer but was not selected in Martin Johnson's 30-man squad for next month's World Cup.

Cockerill added: "It is clearly not ideal at this point in time with the World Cup on the horizon to lose someone of his playing ability and his leadership ability.

"It is a blow for Craner, who loves playing and just wants to play. It is tough for him as a 25-year-old to be having a year out of the game."

Last season's beaten Premiership finalists begin their new domestic campaign on 3 September with a home fixture against Exeter and Cockerill insists they have enough cover to deal with Crane's absence.

"We have the likes of Julian Salvi, Thomas Waldrom, Ben Woods and Steve Mafi as back-row options and we will crack on," said Cockerill.