Martyn Williams has dismissed suggestions he will be playing for a Wales place when he turns out for the Barbarians against Wales on 4 June.

The 35-year-old openside has won 98 caps but was left out of the Wales squad for this season's Six Nations.

Williams still hopes to win a place in Warren Gatland's World Cup squad but is realistic about his chances.

"I'm realistic, I think it's a long shot that I'll get there but that's just how it is," Williams said.

"That's the professional game, there's no room for sentiment and unless you warrant your place you shouldn't be in there.

"I'm not looking at it as a test, hopefully I've played enough games and to be judged on one hopefully isn't the way it's going to be.

"If I don't play again [for Wales], obviously I'm quite happy in what I've achieved and we'll go from there.

"We'll just have to wait and see what happens, that's out of your hands.

"Hopefully the coaching staff know what I can and can't do and if they want me then I'm there, but if not we'll just have to move on."

Sale Sharks scrum-half Dwayne Peel is also being lined up for a place in the Barbarians squad, after missing out on Wales squad selection. 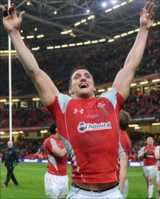 It's going to be a great day for Sam [Warburton], he deserves the captaincy

"It is quite strange to turn up and see the opposition as a Welsh team, so it's something different and I'm really looking forward to it," Williams added.

The man who has taken Williams' number seven shirt is his Cardiff Blues team-mate Sam Warburton, who along with Dragons pair Dan Lydiate and Toby Faletau - expected to win his first cap against the Baa-Baas - is part of a new generation of back-row players who have burst onto the scene in Wales.

Warburton will captain Wales for the first time when they take on the Barbarians at Cardiff's Millennium Stadium.

While Williams is relishing the chance to lock horns with his 22-year-old rival, he says the award of the captain's armband is well deserved and expects Warburton to lead his country again in the future.

"I can't wait for that, I wish I was a few years younger taking him on!" Williams said.

"It's going to be a great day for Sam, he deserves the captaincy, and I can think of easier challenges but I'm looking forward to it.

"I wasn't surprised at all, we all know at Cardiff and I think people have seen this year that he is without doubt captain material.

"He's a very level-headed player, an intelligent player as well and it is by no means going to be his only time, I've no doubt he'll do it a fair few times in the future."

While Williams, who will play one more season for the Blues before retiring next year, hopes he will not be stuck on 98 caps, he praised Wales fly-half Stephen Jones who is set to reach a century of appearances for his country.

"Nobody deserves 100 caps more than Steve, he's been the life and soul of the Wales squad over the last decade," Williams said.

"It's a huge day for him and I'm sure he's looking forward to it - and hopefully I won't spoil it too much but it'll be a good bit of banter throughout the week!"

The game between Wales and the Barbarians has been organised to commemorate the 130th anniversary of the Welsh Rugby Union's formation.

Caps have been awarded by Wales twice before in games against the Barbarians, first in the Baa-Baas' centenary celebration match in 1990 and again in 1996.