Bath director of rugby Sir Ian McGeechan has backed a move to a 14-team Premiership and a five-year freeze on relegation "for the good of rugby".

The former Lions coach believes a new format incorporating Worcester and Bristol to the top tier would create long-term stability for the game.

He told BBC Points West: "There's only certain teams that feel they're in a position to be in the Premiership.

At present, the bottom team at the end of the Premiership season is relegated and replaced by the team that wins the Championship play-offs, but the competition structure of the sport has come under scrutiny.

Currently, few Championship clubs have a chance of gaining Premiership status because of ground regulations, and some clubs have claimed that long-term investment by promoted clubs is stifled by the threat of the drop back to the Championship.

Worcester are 21-12 ahead against Cornish Pirates after the first leg of their Championship play-off final, but an aggregate win for the Pirates would mean a relegation reprieve for Leeds, as the Cornish side's ground does not meet top flight criteria.

"I think the professional game is still learning to be a business and support itself as a business," continued McGeechan. "They probably shouldn't do relegation.

"If more than 12 teams are capable [of being in the Premiership] then we should say; 'you've got five years to build a business plan and work as a group', and they should change the league format slightly if they have to.

"I think it also takes the pressure off the Championship clubs and their finances and expenditure. I think you need core stability all the way down the leagues not just in the Premiership - I think for the good of rugby."

But the Rugby Football Union said in April 2010 that they would block any plans to expand the English Premiership and that the structure would remain in place until 2016.

Defenders of the current system believe such a change to the structure would leave clubs outside the top flight with little to aspire to, and that relegation and promotion generate excitement within the game, particularly in the closing weeks of the campaign - as demonstrated this season by Leeds and Newcastle's dramatic battle to avoid the drop. 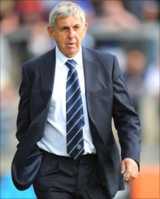 As a professional sport we're still very young, we're still learning and there are still things we can do better

But McGeechan argues: "It's fine having all the excitement of promotion and relegation or whatever on the last weekend, but it doesn't bring huge numbers to watch the games that wouldn't be there whether it was there or not.

"I just think to give our game the best chance of succeeding as a real business with all the excitement of the sport and everything else, I just think it needs that stability."

And McGeechan insists this stability could be achieved by adding Worcester and Bristol to create a 14-team Premiership.

"Obviously clubs have to meet certain criteria and if Bristol didn't then it would be 13," he commented. "But I think we need to have these criteria, then give it that stability of having five years to make a business plan work, and the sort of investment that's needed."

Professional rugby league has embarked on system in which new additions to the Super League are given a three-year contract in the top flight, guarding them against relegation for a preliminary period.

And McGeechan says that similar changes to the structure in union could allow the sport to develop more sustainability.

"As a professional sport we're still very young, we're still learning and there are still things we can do better.

"What we want is a success for everybody, and the sport in general by having that stable development as a professional organisation," he said.