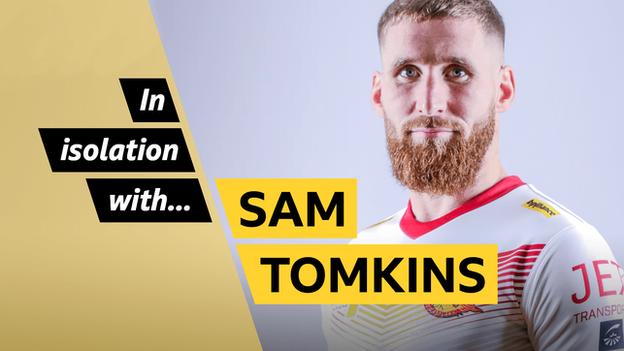 With much of the planet now in complete shutdown because of the coronavirus pandemic, people from all walks of life have had their worlds turned upside down - including sports stars who have been left with no sport to play.

As part of a new BBC Sport series, England international Sam Tomkins, who joined Super League side Catalans Dragons last year, explains what life in lockdown is like in France.

We've been in lockdown for a couple of weeks now, living in a little village on the outskirts of Perpignan.

French president Emmanuel Macron had already shut all of the shops, so - just like the UK since last Monday - the only things which are open now are takeaway food places, supermarkets and pharmacies.

There are police everywhere pulling people over. If you've not got your form with you, you are fined. During the first two days of isolation they gave out 4,000 fines.

I wasn't sure how strict the policing would be - we live in a sleepy village where nothing really happens - but there are constant police cars patrolling, military police around.

I went to the supermarket last week and got pulled over on the way, asking where I'm going, where I live, and you have to show the form.

Some of the English players here have decided to go home - my brother Joel [former England cross-code international] was one of those. He decided to drive home - he said he was on the motorway for two hours before he saw another car. There's just no one about.

Everything's fine here at the supermarkets. When I first moved here it took a long time to get used to French people, everybody being so laid back, but when it comes to something like this it's brilliant.

No one is panic buying, there's plenty of toilet roll everywhere, the only thing that is sold out is hand sanitiser, which is understandable. The shops are pretty well stocked.

They're limiting everything in the supermarkets now, so only so many people can go in at one time.

The little fruit and veg shop round the corner from me is only letting in two people at a time, so you have to wait five minutes... but when you've got nothing else to do, you don't mind waiting five minutes, do you?

'My lads aren't happy, they can't walk the dog'

The blessing we have here is brilliant weather. Our kids have spent the week in the garden just climbing things to entertain themselves, painting the floor outside, building a set of rugby posts between the trees. Without the luxury of doing stuff in the garden it might have been tough.

My little lads are not happy because they can't walk the dog, as you're not allowed to go out in groups. The dog's been playing fetch in the garden for about four hours per day.

My wife was saying the kids have never had a better time - they've got mum and dad at home solid every minute of the day. When you're so busy you don't get that chance, so we're embracing it as much as possible.

I spend a lot of time training through the week and then every other week I'm away playing in England, so it's been good to have some quality time at home with the kids, helping them with their French homework - which is helping my French as well.

I've spent the last 12 months renovating a house in France and I thought we were finished, but apparently not!

My wife is suddenly finding little things we could have done differently - it wasn't a priority when we spent 12 months renovating, but now we've got a few weeks in the house it looks like we've got a brand new list.

I can't understand much of the French TV, so when we're not doing that or spending time in the garden it's pretty much just Netflix for me.

'It's easy to forget to have breakfast'

I have to have a timetable during the day - as a rugby player you live by a schedule, you get sent it a week in advance, it tells you where to be, what to wear, and when to be there.

It's easy at the moment to forget to have breakfast and to sit about in your pyjamas until lunchtime. So each day I'll train at 11:00 to have a bit of schedule.

We get a programme sent to us every day on WhatsApp from our conditioner Rich Hunswick and it's like a prison workout.

I was lucky, when we got told we're on lockdown I nipped into the stadium and stole one of the exercise bikes and a couple of dumbbells so I've got a little home gym set up in my garage.

Mentally it's most frustrating that the season was just starting for us, and now we have nothing to focus on. But it's like that for everyone.