While St Helens are streaking well clear at the Super League summit, there is much more of a storyline and a scrap at the other end of the table.

Among the pack are 2017 champions Leeds and a Wakefield side that has finished in the top five in each of the past two seasons.

Only one team goes down. Survival - and all the financial rewards that go with a spot in Super League - is key.

What is the situation? 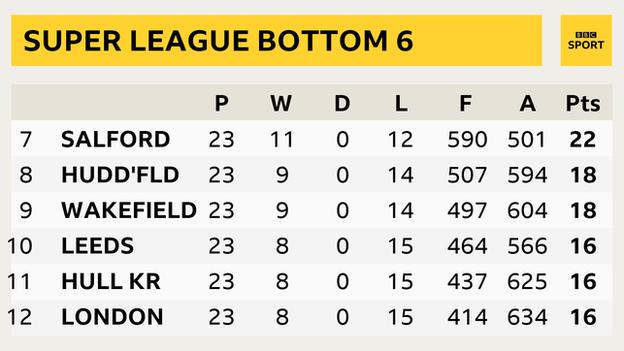 Being part of Super League will give teams a £2.1m salary cap to play with in 2020, and a large proportion of that sum is covered by the central funding received as part of the television deal with satellite broadcaster Sky.

The importance of staying in the top flight is highlighted by the disparity in central funding, which requires clubs to tick certain boxes surrounding income and fan engagement if they are to receive the maximum handout - and it is a sum far lower than the Super League.

Squads have budgeted for the top tier, and it can be difficult, if not impossible, to retain players at Super League level - history has shown clubs such as Leigh and Widnes were forced to shed talent in the wake of relegation.

Simon Woolford's side have already targeted their 'four-pointer' against fellow strugglers Leeds as a key fixture, as they go into their final six games.

The 44-year-old saw his Giants side pick up a morale-boosting win at another side around them at the bottom in Hull KR in their last outing.

They are currently placed above the pack on the basis of the lowest negative points differential and they have scored more points than all of their rivals.

"It's going to be interesting," Woolford told BBC Radio Leeds. "We've got six games left with a break for the Challenge Cup final so there's another week off and we know the job ahead starts with Leeds.

"They're coming off a loss and they want to make some inroads on us, we're only one win ahead of them.

"It's a desperate situation every week for us and this week we play a team as desperate so we need to be ready."

Wakefield's slide down the table amid a run of one win in 10 games meant that the break for the Challenge Cup semi-final was a welcome one.

His injury-hit squad has lost the services of Tinirau Arona and Tom Johnstone with long-term issues, while stars such as David Fifita, Bill Tupou and Pauli Pauli have all missed chunks of the campaign.

Rest and recuperation have been the order for the Trinity squad going forward to the run-in.

"It came at a really good time," Chester said. "We were a bit down on confidence and guys were playing busted with some injuries.

"It gave the players time to spend some time with their families, and gave myself some time to freshen up as well.

"It's does everyone good, we treated it when we came back as a mini-preseason. The signs have been pretty positive."

With the transfer deadline on 9 August beckoning, late recruitment efforts are ongoing across the league and Chester is no exception.

"Every club you ask wants to keep hold of the players they've got for this next six weeks, and you can understand that," he added.

"We're having to really fight hard to bring somebody in to give us a boost and give me selection headaches.

"I'm playing players week in week out because we've only got the 17 or 18 training on a weekly basis."

Tony Smith has gone a little outside the box to pump up his Hull Kingston Rovers side for the grind ahead.

In addition to some high-intensity sessions on the paddock, the veteran coach took his players to the seaside on the back of their defeat by Huddersfield in their final game before the cup break.

"We had a session at Bridlington beach," Smith told BBC Radio Humberside. "The boys loved being in the sea in all that warm weather and then we did some traditional fish and chips together as a group.

"It's nice to do some of those things away from the training centre, freshen things up and spend time together socially.

"We've took some time out and invited the wives and children to tenpin bowling - there were better bowlers in the wives and girlfriends than the players.

"It was good fun and also our way of including families and making sure they know how important they are in what we do.

"We've got enjoy what we're doing while we work intensely."

Leeds have to take positive approach

Despite losing their past two games - including a gut-wrenchingly tight home defeat by Hull FC in their last outing - Leeds Rhinos are promising a positive attacking mentality.

Head coach Richard Agar wants his side to express themselves in the final games of the campaign.

"When we talk about the bottom four or five in these battles, sometimes they can get a little anxious," he said.

"People become very risk-free but we're encouraging our side to go and play, attack with the ball and defending,

"We don't want a nervous, high-completion kick-chase game, we want to play with smiles and enjoyment and free-flowing spirit.

"Not frivolous, having a healthy respect for the football when the situation demands. Our last six fixtures - every one is winnable. But every team is going to be determined and motivated.

"Undoubtedly, people will look at respective league positions and points and it's a must-win for both teams."

London recruit for the final furlong

London Broncos have been causing shocks and surprises ever since their charismatic coach Danny Ward stepped up at the beginning of last season, and took them into the Super League in his first year in charge.

They were the favourites to be relegated at the start with the bookmakers, and given a 150-1 chance of finishing top of the regular season table.

Since arriving back in the elite, the Broncos have beaten St Helens and Wakefield twice on home turf, and also picked up wins against Wigan and Leeds - the latter at Headingley.

They face three of the bottom five in their outstanding fixtures, and Ward has added personnel in the shape of ex-Newcastle and Roosters half-back Brock Lamb to his ranks.

"Losing Morgan [Smith] to injury and Jimmy Meadows picking up a decent ban, it left us a little short in this area and we needed to strengthen," Ward said.

"Brock is a quality young half-back who we hope will give the squad a boost going into the final phase of the season."

Although Broncos are level on points with Hull KR and Leeds, their points difference is inferior.

Former Giants prop Eorl Crabtree and Toronto Wolfpack back-rower Jon Wilkin discussed their hopes of staying up on the BBC Radio 5 Live Rugby League podcast and their thoughts are not hugely comforting reading.

"London, especially this end of the season, teams won't take them lightly," Crabtree said. "Other teams won't rest loads of players against London [as St Helens did] if it's going to potentially affect their own chances.

"Now it is getting to this end of the season every team will turn up and every game will be taken seriously as it possible could be.

"London have shocked a few people and in the position they're in they're favourites to go down but they can also win games too because of the brand of rugby they play."

Wilkin added: "London have done great, I think their performances have done quite a lot.

"However, I think they needed to be ahead at this stage to allow them to lose some games at the back end."