"We're known to be tough, we run at brick walls for a living, but we're human beings with emotions."

However physically resolute modern rugby league players are, they still face the same mental trials and tribulations as anyone else.

Super League is embracing a push for players, coaches, fans and anyone associated with the sport to consider their mental health with the advent of 'Wellbeing Round'.

The 'Tackle the Tough Stuff' campaign has seen those associated with the game share their stories, in the hope of persuading others to follow suit.

"Sometimes you just want to talk about you"

Giants front-rower English was part of the club's academy side when team-mate Ronan Costello died after tragically slipping in a tackle against Salford in June 2016.

Costello, 17, was taken to hospital in an air ambulance but died days later following the accidental severe brain injury.

"It's a day I'd love to forget but I don't think I ever will," English told BBC Sport.

"We're known to be tough, we run at brick walls for a living, but we're human beings with emotions, and that's what I want to get across.

"You can show weakness. I was 18 years old at the time and I didn't handle it all.

"I took on everyone's grief instead of mine. I tried to be there for everyone else but never had the conversation with myself - 'you're not alright'. I wish I had so long ago.

"I thought 'why did the sport I loved since I was five or six years old take a friend from me?' It was the tough bits for me, I had so many unanswered questions I don't think I'll ever get the answers to."

After English finally broke down in front of his parents and poured out the bottled-up thoughts, his mum advised him to speak with Giants player welfare officer Steve Hardisty.

Ronan was a legend bloke, and he had a dig for the boys, and I always try to take a part of that with me

The pair shared a long chat over the phone, which then led to a meeting with a counsellor.

"I was sceptical for starters," he recalls. "I thought 'what can talking to a randomer do for me?', but I'm so glad I did.

"Within 10 minutes I felt so comfy in her company. We didn't talk about Ronan for a while and we just got to know each other and she just brought in little promoting questions.

"She didn't ask or question me, she allowed me that blank canvas to talk about it. Everything I'd always bottled up I could just say.

"I felt like with grief, in my case, when you talked to someone about it, they put their input in. Sometimes you just want to talk about you, and how you're feeling.

"Just to listen, to take in what I'm saying and tell me I'm not stupid for feeling like this. For such a young person to witness what I did it was tough.

"Ronan was a legend bloke, and he had a dig for the boys, and I always try to take a part of that, and live on in his legacy."

"There's no better place to rebuild than rock bottom"

What do you do when something that is effectively all you have known for 18 years, is no longer part of your life? How do you cope?

For Wales international Paul Highton, it was like dropping off a cliff.

He quit the day-to-day banter of the dressing room, the training paddock and the post-match beer, for the solitary world as a sports development officer. Lots of solo working - the exact opposite of what he had known for so long.

"That's when the dark thoughts started creeping in," he said. "I'd got to the point where I was heavily medicating myself.

I woke up one Friday and thought - 'this is it, I'm out of here tonight, I can't do this'

"I was abusing prescription drugs, using Tramadol as a coping strategy.

"It sort of slowed my life down and allowed me to think clearer. It allowed me to sleep as I was struggling with insomnia. It used to wake me up to stop my body aching, I used them to give me confidence to do my presentations and just be in a public area.

"It got to the point where Tramadol had taken over my life and it was all I could think about.

"It was the first thing on my mind when I woke up, the last when I went to bed. Worrying if I have them in my car, at my desk at work.

"I was taking up to 30 a day, a phenomenal amount," he continued. "It got to the point where my partner had got very close to finding out how out of control my life was getting." 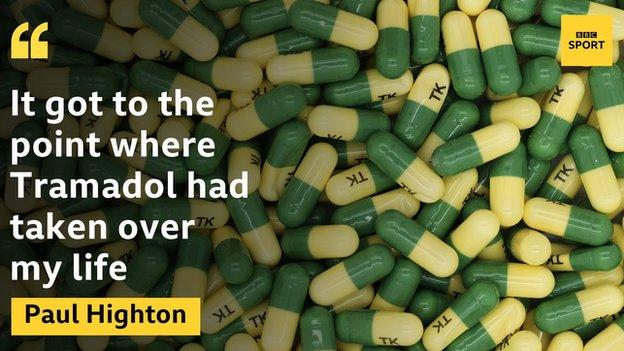 For a while it was a coping strategy, and maybe Highton was coping. But it was starting to impact on life - work and relationships were affected.

He moved out to try to sort out his issues, find a 'safe haven', and planned to come back a changed man. However, that was not how it worked out. It instead led to his darkest hour.

"I woke up one Friday and thought 'this is it, I'm out of here tonight, I can't do this'," Highton said.

"Luckily for me it was a failed attempt (at suicide). I got drunk and fell asleep on the settee, and that was a huge sledgehammer to the side of the head.

"It was a wake-up call. There's no better place to start rebuilding your life than rock bottom, and there's where I was."

Highton credits being honest with himself with the turnaround in his life. He sought help from charity Sporting Chance, who promptly provided him the support of a counsellor.

"He didn't know who I was and what I was, but he understood what I was doing," Highton explained.

"He gave me thoughts and solutions to the behaviours I was expressing, and just that act of getting the deep dark secrets off my chest - I went to 12 weeks of counselling.

"The one which has taken the place of the Tramadol is meditation. I go to the Buddhist Centre twice a week, it chills me out and gives me peace and clarity. Meditation, exercise and just being honest and open about not feeling great.

"When feelings kick in, I do something constructive, not destructive. I'm not the finished article but I'm far better equipped to deal with it these days."

"I got involved in a charity and tried to help others"

Dwyer plays at 100 miles per hour, skipping out of dummy-half and buzzing about like a clockwork mouse.

And, for a while, that was his style off the field too. He was the joker, the livewire, the life and soul of a dressing room packed with banter and patter.

"It was the personality I'd created myself having grown up with a birthmark, and having insecurity," Dwyer said.

"I went straight on the front foot, being involved in the rugby environment and around lads every day increased that every day and helped me cover it up."

It was not until Dwyer went through a break-up that he realised what impact his insecurities were having.

He sought the counsel of player welfare manager Nigel 'Fats' Johnston, who helped guide the 26-year-old towards feeling comfortable with the situation.

"I tried to get the birthmark removed, but it wasn't possible with playing rugby," he continued. "So when I came back after the break, I just wanted to come out and face it head on.

"I put some stuff out on social media at first. They helped me get this story out there.

"I knew then if I came into uncomfortable situations it wouldn't affect me as I had already accepted what I had going on."

The response of other people - be it team-mates or members of the public - who have been in touch with Dwyer has helped him not just feel comfortable. but actually brought him happiness.

"Until I hit rock bottom and trying to figure out why I was down in my own time, since I've opened up, it's been great," Dwyer said.

"It's great having a laugh, but when the lads turn round and say they have respect for what you have said, it really helps.

"I got involved in a charity and tried to help others. It's been great."

If you are affected by any of the issues in this story, help and support is available at the BBC Action Line