England's Test series victory over New Zealand has seen a clutch of new stars emerge on to the international stage.

It proves England's well of talent is deeper than it has been in generations.

Ten of the players who pushed Australia to the limits in last year's World Cup final were not available to Wayne Bennett before this series.

Two have retired from internationals but the other eight - missing because of injury - would have expected to be near certain match-day selections had they been fit.

So we gave you the opportunity to step into Bennett's shoes and pick your best England team given a clean bill of health. 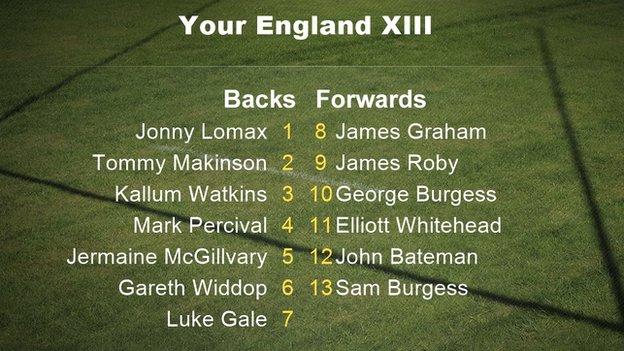 One of the closer calls came at full-back where St Helens' Jonny Lomax, who started all three Tests in the number one shirt, took 39.5% of the vote ahead of Sam Tomkins (28.3%).

Tomkins started the opening two Tests at scrum-half and received 17.2% of the vote, but was overlooked by you in favour of Castleford's Luke Gale (26%), who missed the series through injury.

England skipper Sean O'Loughlin was ruled out of the final two Tests with a calf injury he sustained in the first game and that may have cost him a place in your side.

The Wigan man received 24.2% of the vote, leaving him out of the side after you favoured South Sydney Rabbitohs forward Sam Burgess (37.6% ).