Kevin Sinfield can have a job at Leeds Rhinos when he retires as a player, says head coach Brian McDermott.

The 35-year-old won 12 major trophies and captained the Rhinos for 13 years before switching codes last November.

Sinfield has announced he will retire after Yorkshire Carnegie's Championship play-off campaign.

"I'm more than interested in doing something with Kev. He has a wealth of knowledge both on and off the field, so we'll tap into that," said McDermott.

Talking to BBC Radio Leeds, the Rhinos boss continued: "Kev would be described as one of the true greats that got there and stayed there.

"Sport needs to take note that he passes over from those that can do, to those that can't anymore, and I'm sure he will find a role somewhere. We are talking about some things that may happen."

McDermott confirmed there is scope at Headingley to have Sinfield rejoin the club in an ambassadorial or coaching role.

Sinfield, who finished second in BBC Sports Personality of the Year 2015, left the Rhinos after helping them secure the treble of Grand Final, League Leaders' Shield and Challenge Cup triumphs last season. 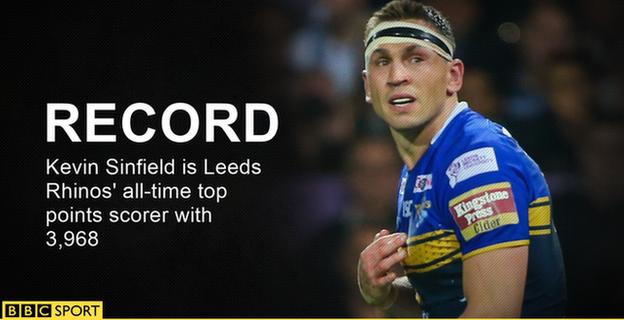 He moved to rugby union side Yorkshire Carnegie on an 18-month deal, but this week confirmed his plans to retire at the end of the season after just seven months in the 15-man game.

While Sinfield has previously admitted he would miss playing rugby league "every day for the rest of my life," McDermott said he had never considered the idea of bringing the playmaker back in an on-field role, despite their struggles this season.

Rhinos, third from bottom in the Super League after losing nine of their opening 12 games, lost club greats Jamie Peacock and Kylie Leuluai at the same time Sinfield left and were also hit by an early-season injury crisis.

"There is a version of what we are going through at the moment that is very good for us," said McDermott. "To go get Kev back, to try rescue the situation with him or JP, it would cause that much damage to these young fellas' progression.

"This is where we have to trust where we are at. We have to hold our nerve and see it through."