Shaun Wane's side will meet the winners of Friday's second semi-final between Leeds Rhinos and St Helens at Old Trafford on 10 October.

Ben Flower, who was sent off in the 2014 Grand Final, and John Bateman went over for Wigan's first-half tries.

Dom Manfredi, a penalty try and Tony Clubb sealed a comfortable victory for the hosts.

Brett Ferres added a late consolation try for Huddersfield, who were denied a first Grand Final appearance by a clinical Warriors outfit that has not lost at a home game in Super League since June 2014. 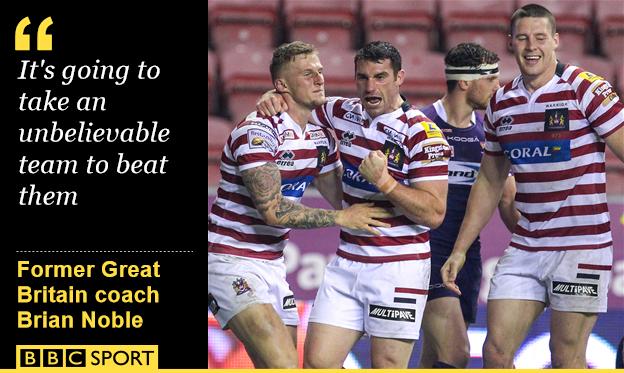 Much of the focus in the build-up to Wigan's return to Old Trafford will be on Flower, whose dismissal and subsequent six-month ban for punching Lance Hohaia dominated the aftermath of their 14-6 defeat by St Helens 12 months ago.

It was Wales prop Flower who gave his side the perfect start in their semi-final, racing through a huge gap in the Giants defence for Wigan's first try.

Matty Bowen's penalty made it 8-0 and, after the visitors failed to register any points during their best spell of the first period, Manfredi's catch and offload set up Bateman to touch down in the corner.

Danny Brough got Huddersfield on the scoreboard with a successful penalty in the closing seconds of the first half.

Jermaine McGillvary, Super League's leading try scorer, was pushed into touch near the Warriors try-line as he attempted to reduce the deficit.

Wigan responded with two tries in quick succession, first Manfredi showing superb finishing ability and then the home side being awarded a penalty try.

The outstanding Bateman, having tapped the ball into the in-goal area, was tripped by Giants full-back Scott Grix as he attempted to ground the ball and the score was given after long deliberation by the video referee.

Bowen added another penalty and Ferres forced his way over from close range for Huddersfield, before Clubb's last-minute try started Wigan's celebrations.

Wigan Warriors coach Shaun Wane: "We defended really well, apart from the try they scored. We didn't attack that good - I think we need to be smarter next Saturday but we had a good mentality.

"We'll be better next week. We've got a nine-day turnaround and we'll use it wisely."

Huddersfield Giants coach Paul Anderson: "We never got going if I'm honest and the scoreline is probably a fair reflection of the game.

"I felt their attitude to the tough stuff was probably better than ours. I expected Wigan to be physical and we didn't quite go with them. They rolled their sleeves up and did some tough stuff.

"What's gone before doesn't matter. It's not how you start, it's how you finish. We built things nicely through the year but we haven't got the finish we wanted and it's very deflating."