Wigan winger Joe Burgess hopes to say goodbye to the Warriors fans by sending them into the Grand Final.

The 20-year-old plays his final match at the DW Stadium in Thursday's play-off semi-final with Huddersfield, before moving to Australian NRL side Sydney Roosters next year.

Burgess, who made his debut at 18, has emerged through the club's academy.

"I'm just thinking about this as my last home game for now," he told BBC Radio Manchester.

"I want to make it count and end on a high and make my family, and town, proud.

"I'm concentrating more on the game but the move is at the back of my mind." 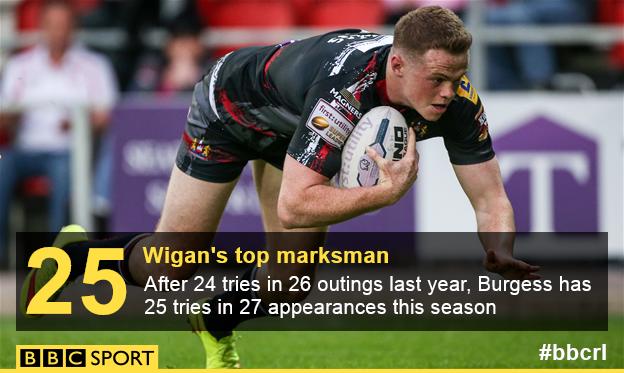 To reach the Grand Final for a third successive season Wigan will have to overcome Paul Anderson's Huddersfield Giants, a side who they have already beaten three times in 2015.

Asked if that record matters, Burgess replied: "No, not at all. When it is games like this there is more on the line.

"We've both got the best defence in the league so it's going to be a tight game and it could come down to something late again."

The Warriors have won five of the last seven meetings between the teams, but head coach Shaun Wane is aware of their threat.

"They're big, athletic and they've proved this year they can burn teams," said the 51-year-old.

"They're coming to us and I'm expecting a really tough battle. They're very well coached and they're really going to challenge us."

One step from Old Trafford

After a trophy-less season in 2014, this will be the last chance this year for silverware for the Cherry and Whites.

"There is not a person who could put more pressure on me than myself," Wane told BBC Sport. "I have high standards in what I want to achieve."

"We didn't get to the Challenge Cup final, we haven't won the League Leaders' Shield and I work long hours because I want to get something out of this year and that means a Grand Final win hopefully."

Burgess scored in both the play-off semi-final and Grand Final last year, but wants to avoid the felling he had after the loss to rivals St Helens at Old Trafford.

"If was a funny feeling because it just felt like all that work in the season had just gone to waste," said the winger.

"Even though we played pretty well considering what happened, we stuck with each other - it was gutting and it gives us more determination."