Only 13 men are deemed worthy of a place in the Dream Team, a line-up that represents the very best of Super League throughout the 2015 season.

Players must be voted for by a 40-strong panel of journalists, broadcasters and experts that rewards the best players for each position.

BBC Sport's rugby league experts have revealed their choices, as the team is officially announced on Monday, 28 September.

See who made the team here. 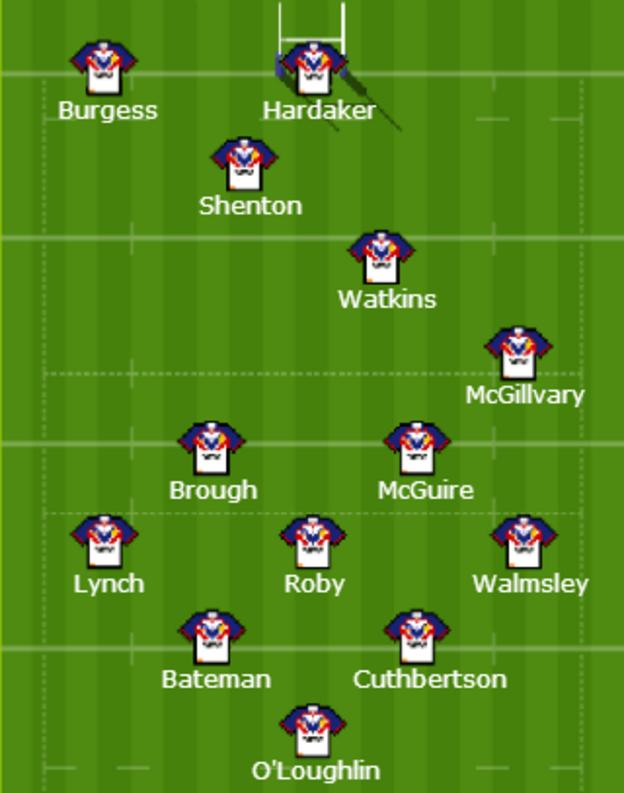 Hardaker is quite simply the best full-back in Super League at the moment by a distance. On the wings, Burgess has had a couple of injury disruptions and a shaky start to the season, but remains an outstanding finisher, while McGillvary is big and powerful, no winger is harder to tackle.

Watkins is not just one of the best centres in this Super League season, but is up there as one of the best in the Super League era. Shenton is playing as well as he's ever done, and that's some standard. In the halves, Brough is the best about, McGuire has had a renaissance year for a real Leeds legend.

Prop Walmsley is the rock on which so much of Saints' good stuff can be built on. Lynch is reaching the veteran stage, but he still grinds out the metres and doesn't seem to stop even when he hits the defensive line. At hooker I was tempted to go for Paul Aiton at Leeds or Michael McIllorum at Wigan, but Roby remains the "go to" man.

Behind them, Bateman played a lot at centre latterly, but the kid's a natural back-rower. He's a great mix of grunt and class. Alongside, Cuthbertson had a shout to get in at prop, loose forward or even hooker. He had to get in. O'Loughlin is a truly outstanding performer. 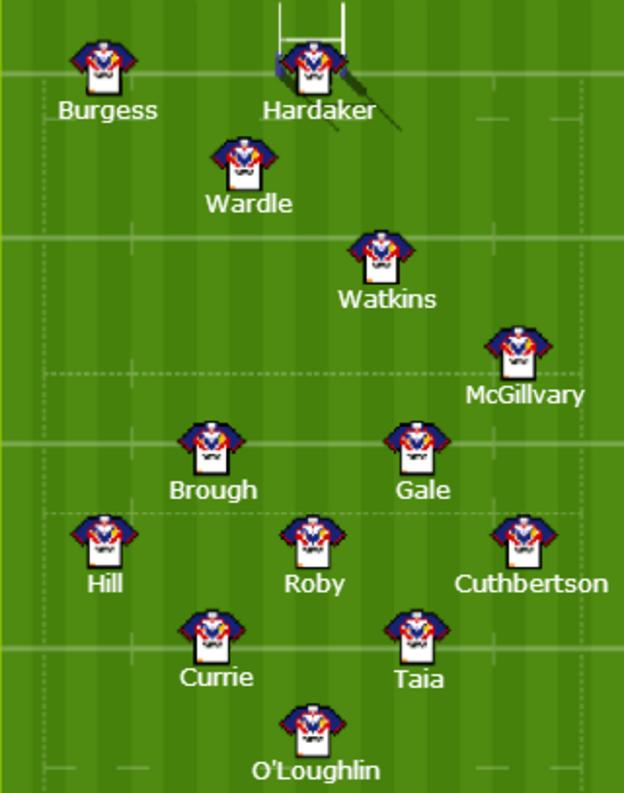 I've tried to base my 13 as far as possible on individual performance rather than team position in league - some such as Zak Hardaker, Kallum Watkins and James Roby, who would be my Man of Steel, have been outstanding.

I've picked three Huddersfield players as they have shown a tremendous consistency with only four losses in their last 19 league games but never got the credit from some quarters, and in Jermaine McGillvary there is a player whose form must have caught the eye of England coach Steve McNamara.

Anyone surprised by two Warrington players in my 13 shouldn't be. Chris Hill's performance levels are astonishing, while Ben Currie is the most skilful all-round young player in the competition and a tremendous talent.

Like many, loose forward was the problem position but in that case you pick the best and even in only half a season, Sean O'Loughlin's presence in Wigan's side was the catalyst for Warriors' improvement performance-wise in the second half of the campaign. 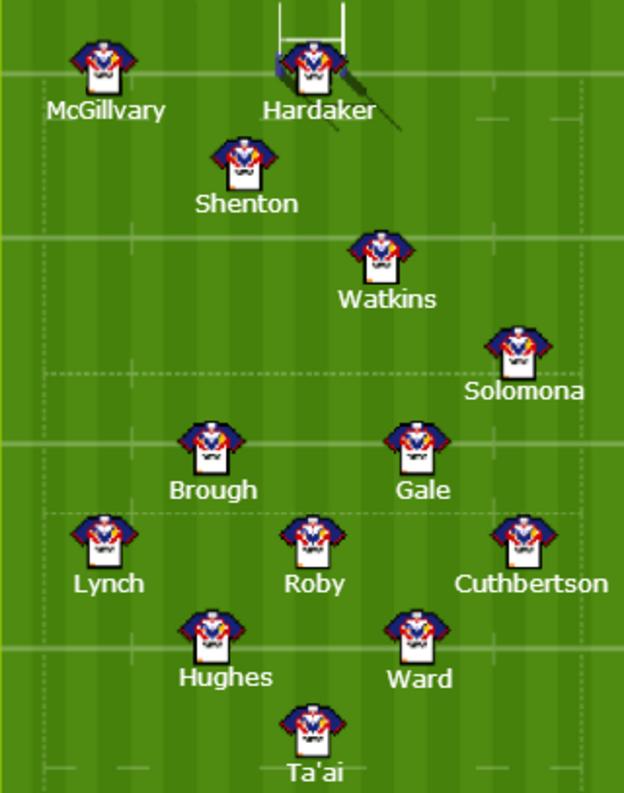 Hardaker's one of the best all-round players - a constant threat. McGillvary's 27 tries reflect only part of his worth to the team, while Denny's injuries have restricted his appearances but he's scored some sensational Tigers tries.

In the centres, Kallum is collecting Dream Team shirts for fun - the perfect centre. And Shenton is 'Captain Fantastic' for the Tigers - he leads by example. Gale, after a slowish start, found his feet to orchestrate some big wins. He has to be in the reckoning for England, while Brough possesses the best kicking game in Super League but has the hands also to open up defences.

Lynch is a modern day freak of a prop who plays better the more minutes he plays, while fellow prop Cuthbertson has proved himself to be the best signing of 2015 across Super League. Hooker could have been Paul Aiton had his season not been ended prematurely through injury but Roby continues to prove himself to be England's first choice.

Hughes is in ahead of Giants' team-mate Joe Wardle, who's been a revelation playing in the back row. Ward has taken on a more senior role within the Leeds team and squad and has flourished as a result. Ta'ai has to be the most improved player in Super League. 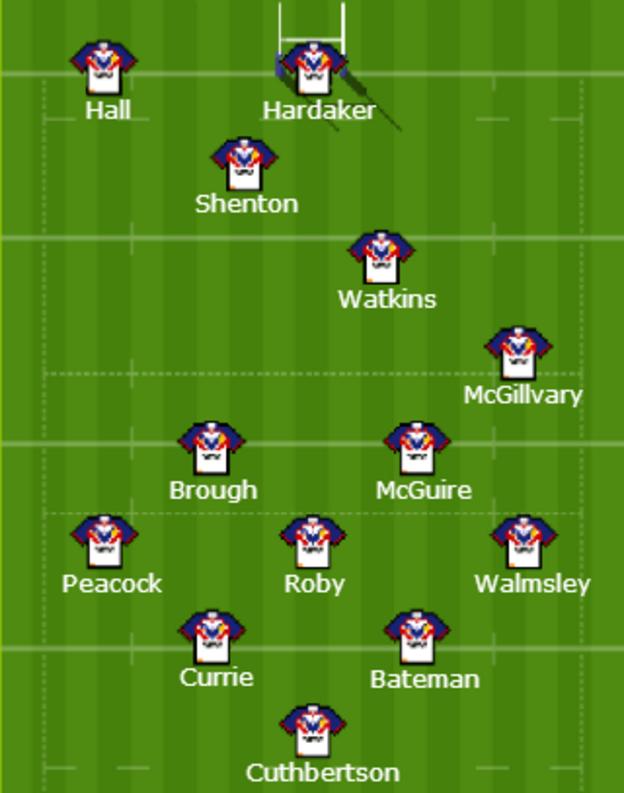 When putting together my potential Dream Team this year I found certain positions had a very long list of candidates, while others only had a couple of names worthy of consideration. With the exception of one player (Ben Currie) I have selected a side from the top five teams in the competition, who in my opinion have been a class above the rest.

Man of Steel candidates Zak Hardaker, Adam Cuthbertson (but in which position?) and Alex Walmsley are obvious inclusions, Ryan Hall continues to be the most complete winger in Super League and Jermaine McGillvary's try-scoring form have seen them included as my outside backs.

Danny McGuire is my scrum-half. I believe 2015 has been a great year for the Rhinos stalwart. Ben Currie and John Bateman could be an international second-row pairing in a few years' time and Danny Brough, Jamie Peacock and James Roby have continued to perform at the top level.

Castleford trio Grant Millington, Andy Lynch and Luke Gale, plus Huddersfield's Ukuma Ta'ai, all just miss out for me and would therefore probably be the basis of my bench. 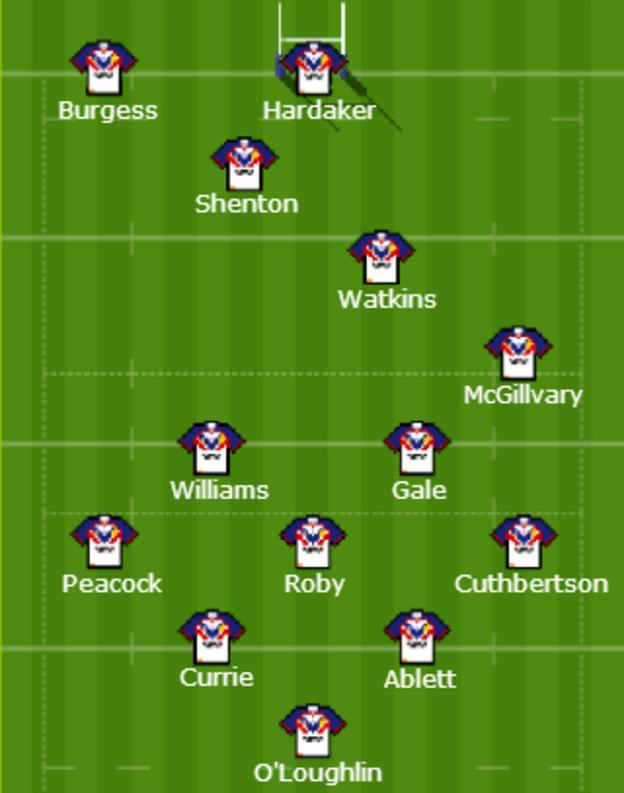 Selecting a squad that reflects the best of each position was a lot tougher in some areas than others, I could almost have picked a team of props with Alex Walmsley, Chris Hill and Grant Millington unlucky to be omitted.

Others like Hardaker, O'Loughlin and Roby were the overwhelming stand-outs in their position. I am also firmly behind a centre partnership that could do fine job for England this autumn in Shenton (injury permitting) and Watkins - classy, solid and smart.

I found the halves and back-rowers a tough call too, For example I left out Giants dynamo Danny Brough, but in Williams I have seen a quality, a spark that warranted selection. It was a real 50-50 call. Danny McGuire for Gale perhaps too - but the Tigers half was my gut-instinct pick for his marshalling and running game.

Zeb Taia and Elliott Whitehead could also feel hard done by but Currie has been superb and prolific, while Ablett sets a high standard and has brought best out of Stevie Ward. O'Loughlin, for me, was the best lock - closely followed by Nathan Massey and NRL-bound Tyrone McCarthy.