The Rhinos retained the cup on Saturday but for the second year running found a fired-up Saints who prevented them going six points clear at the top.

Saints halves Travis Burns and Luke Walsh were dominant, with the latter scoring 16 of the 32 points.

The win puts the visitors level on points with third-placed Huddersfield.

Castleford, who lost at the Giants on Thursday night, are now under pressure to beat St Helens when the two meet at the Jungle next Thursday - as defeat would end their hopes.

Having been so clinical in the Challenge Cup final victory against Hull KR, Leeds lacked the same accuracy and execution with crucial errors throughout. 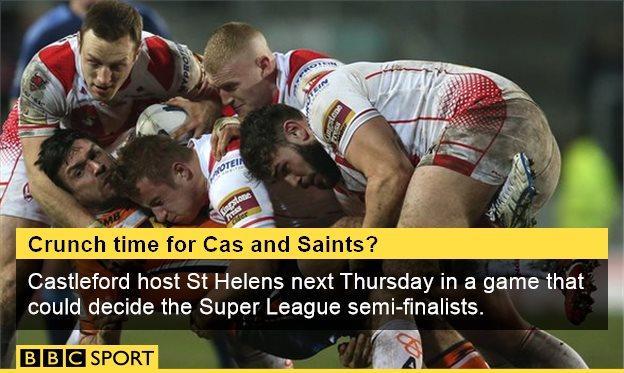 They were without key players Zak Hardaker, Kallum Watkins and Rob Burrow, although stand-in full-back Ashton Golding emerged with credit on his 19th birthday.

Keiron Cunningham's side took full advantage of the hosts' mistakes to score the opener on the back of Danny McGuire's error through Tommy Makinson, although Jimmy Keinhorst burst through for a reply on the back of work from Mitch Garbutt and McGuire.

Adam Cuthbertson and Garbutt's mix-up on the restart gave Saints field position and they twisted the screw with repeat sets that led to Josh Jones' try on the left.

Mitch Achurch twisted over as Leeds kept pace but sublime footwork from Walsh took him across, and after a penalty goal Adam Quinlan took a delicious inside pass from Travis Burns in the second half to further extend the lead.

Ryan Hall's well-worked score lifted spirits around Headingley but once Jon Wilkin crossed late for a 100th try a controlled St Helens had a comfortable lead to see them through to the hooter.

"There is a bit in that, I wouldn't put it all down to that. I thought Saints played very direct and aggressive.

"There was too much dropped ball near their try-line and, as the game started to bite, too many fellas dropped off tackles.

"I thought the team we had out there was good enough. We looked decent for spells in the game. Defensively I thought we were solid for the most part, but as we got tired, which we thought we would, we started to drop off."

"You saw the leadership that Jon Wilkin gives the team, I thought Luke Walsh was phenomenal and Alex Walmsley just gets better every week.

"We were really determined tonight, I could see it on the faces of the players in midweek. A few people like to kick you when you're down but we're together and we quite like the idea that everyone had written us off. It's not the best we've been with the ball - we need a lot of improvement in our attack - but defensively I was really happy with the intent from minute one.

"I'm pleased for the team. We've been in a bit of a dark place over the last four weeks but the break definitely did us good and I'd like to think we can move on."