The top eight of Super League will battle it out to finish in the top four, where they will then enter the play-offs to compete for a place in October's Grand Final at Old Trafford.

Super League's bottom four will combine with the top four teams from the Championship to form The Qualifiers.

After seven rounds of matches, the three top-placed teams in this middle league will have secured a Super League spot for 2016, with the sides lying fourth and fifth facing each other in a play-off - The Million Pound Game - to determine next year's final top-flight team.

This complicated structure is new for 2015, with the Rugby Football League reintroducing promotion and relegation following six years of the licensing system.

The race to Old Trafford 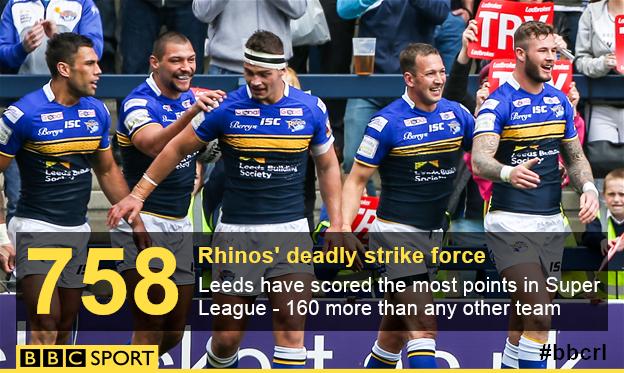 This time last year, not many people outside rugby league will have known Ben Flower.

The Wigan prop hit global headlines in last season's Grand Final when he was sent off for twice punching St Helens half-back Lance Hohaia, which later earned him a six-month ban.

St Helens went on to win 14-6 and claim their first Super League title for eight years.

As for the race to Old Trafford in 2015, reigning champions Saints sit just a point behind table-toppers Leeds Rhinos - but the Yorkshire side have beaten them three times already this season, including in the Challenge Cup semi-finals last Friday.

In Keiron Cunningham's first year in charge, Saints have impressed at times but have still lost seven times in 23 games so far.

Previously, the top eight teams were involved in the play-offs. Saints chairman Eamonn McManus is positive about the change in format.

"The whole season has been a success to date, that's no doubt," he told BBC Radio Merseyside.

"This is an experimental year in some areas. There were some sceptics about it, but I think everyone's been won over by this - not just in rugby league, but sport as a whole has looked at this and realised that it is a very smart and productive structure."

Last year's beaten Grand Finalists Wigan sit just a point behind Saints, with Huddersfield - the team with the best defensive record in the league - making up the current top four.

Castleford and Warrington will still fancy their chances of finishing in a play-off place, while Hull FC and Catalans will have to hit some impressive from in the next seven games to be involved in the latter stages. 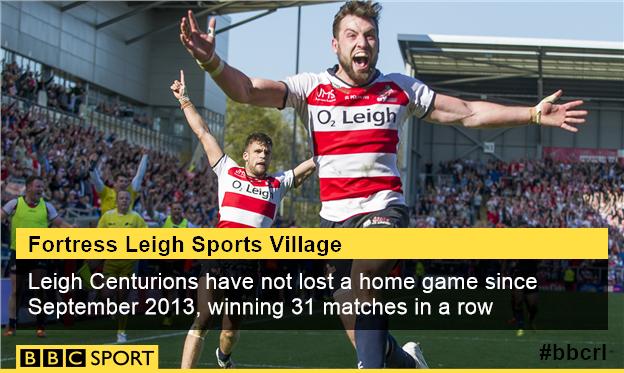 Perhaps the most intriguing part of the Super 8s will be the middle section, called The Qualifiers.

Challenge Cup finalists Hull KR, Widnes, Salford and Wakefield will all be hoping to maintain their top-flight status.

Leigh Centurions, who have not been in Super League since 2005, have won the past two Championship titles and have already beaten top-flight opposition in Salford and Wakefield in the Challenge Cup this season.

"We're confident that if we maintain our high standards that we've had for the last two years, we can have a big say," said Leigh head coach Paul Rowley.

"I just promise we'll make it interesting. I make no predictions but we're confident and we'll have a good go."

Big-spending Salford and Wakefield look to be the most vulnerable to losing their places, given they finished in the bottom two before the Super 8s.

The Wildcats have won just three games all season, but have improved under new head coach Brian Smith.

The Red Devils, meanwhile, have had to deal with several off-field issues this season - full-back Kevin Locke quitting, owner Marwan Koukash in a dispute with Salford City Council and head coach Iestyn Harris's absence because of illness for more than a month.

"We're in the middle eights now, there's that relegation in the back of the minds," said Salford assistant Ian Watson, who has taken on head coach duties.

"We're excited by the challenge of the middle eights. Our aim is to top this group now - there's some really good teams in there but it's something that has to excite you."

After 14 seasons playing at the highest level with Bradford and Hull KR, Jamie Langley opted to spend 2015 at Championship side Sheffield Eagles who, along with Halifax, are the only teams in The Qualifiers who are currently part-time.

"It's massively different, it's opened my eyes a lot," said the 31-year-old.

"A lot of these lads are working manual jobs. They'll be up at six in the morning, finish at five and drive straight to training - and they're not just sat behind desks, they're bashing houses.

"They'll give three nights a week up, and weekends are gone, so it's a massive sacrifice for these players. Now I've seen both sides of the coin, I've got a new-found respect for these lads and they really, really do love the game."

Watch highlights from Super League and The Qualifiers on BBC's Super League Show every week, and read match reports from every game in the top two tiers of the Super 8s on the BBC Sport website.