Sam Tomkins is returning to Wigan from New Zealand Warriors next season to be part of the club's culture, says head coach Shaun Wane.

He joins brother Joel Tomkins and prop Lee Mossop in returning to the DW Stadium over the past year.

"It's a great shot in the arm for English rugby league and for Wigan," Wane told BBC Radio Manchester.

"There is something in why they come back here - it is a good culture, our staff are good, we do things right and that's why these players come back to us." 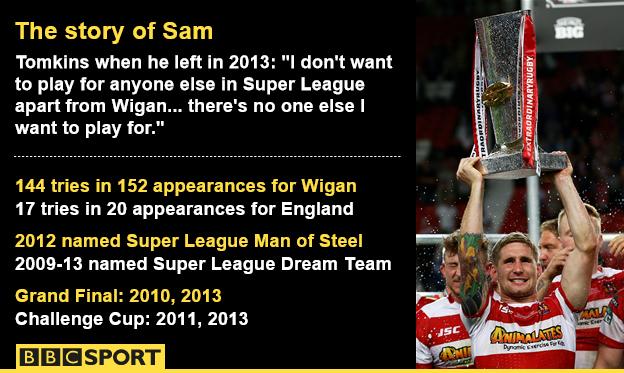 The Super League outfit had first refusal on Tomkins, as they included a clause in his world-record deal to move to the National Rugby League side.

Tomkins cited homesickness as the reason he wanted to leave the NZ Warriors a year before his three-year deal was due to expire, and revealed he had spoken to Warrington before agreeing his Wigan return.

"We have got one of the best players in the world coming back to our great club and I'm really, really pleased," added Wane.

"He's one of them where he will have learnt from his experiences. He's a real good competitor and I've seen him do things in games in New Zealand that are going to make him a better player.

"He's excited to come but he's got a job to do in New Zealand first."