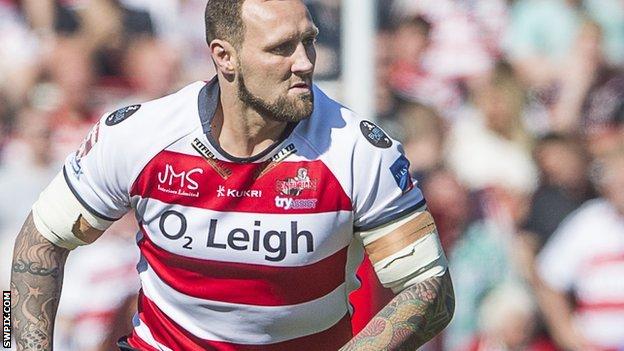 Gareth Hock ignored the threat of legal action to face former side Salford and help Championship leaders Leigh reach the sixth round of the Challenge Cup.

Leigh were 12-6 up before ex-England forward Hock came off the bench.

Scores were locked 12-12 at the break with Theo Fages and Niall Evalds going over for Salford either side of Tommy Goulden and Greg McNally efforts.

The Centurions, unbeaten before the cup tie and among the favourites to challenge for promotion to the top flight, showcased their credentials as a potential Super League side in front of a boisterous crowd at Leigh Sports Village.

Salford, who had won three of their last four league matches to move up to fourth in the Super League, went ahead on seven minutes through Fages.

However, the Red Devils side that was already missing playmaker Rangi Chase through suspension then lost influential half-back Michael Dobson because of injury.

The visitors suffered a further set-back when Junior Sa'u left the pitch with an arm injury.

Both sides wasted good chances before two tries in three minutes from Goulden and McNally saw the Centurions take the lead.

Hock, who Salford argue broke a settlement agreement, was introduced to the game on the half-hour mark before Evalds' converted effort for Salford locked scores up again.

Evalds twisted over for his second try to put Salford ahead again, while Liam Kay spilled the ball over the line at the other end under pressure from impressive France international Fages.

The hosts eventually responded with Brierley intercepting a Ben Jones-Bishop pass to race over to help make it 18-18 before Pownall's touchdown put Leigh in front two minutes later.