Tries from Whitehead, Eloi Pelissier and Damien Cardace in the first 12 minutes of the second half then turned the match in the home side's favour.

Following St Helens' loss at Hull KR on Friday, the Rhinos - who were without captain Kevin Sinfield and winger Tom Briscoe because of injury - knew a win by eight points or more would take them above Saints at the top of the standings.

They went ahead early on through Ablett, who has now scored tries in each of the last four meetings between these two sides, the England second-rower barging his way over the line following Adam Cuthbertson's offload.

Former Bradford forward Whitehead profited from Scott Dureau's excellent dummy to level for Catalans, who then went close through prop Remi Casty, but Ward evaded two tacklers to give Leeds a four-point advantage. 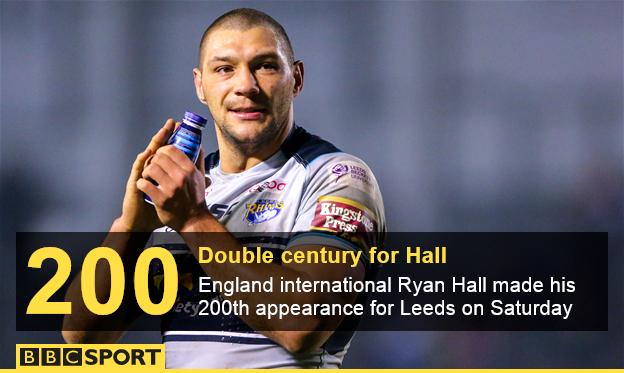 Catalans started the second half in style with three quick tries, first Whitehead collecting Julian Bousquet's pass to cross from 20 metres and then Pelissier selling an outrageous dummy at the play-the-ball before touching down.

And when Ben Pomeroy's offload sent winger Cardace over, Catalans had turned their half-time deficit into a 12-point lead.

Back came Leeds, though, as Singleton and McGuire crossed in quick succession to make it 22-22 in Perpignan, before Willie Tonga lost his footing in attempting to deal with a kick through and Sutcliffe took advantage to score the game's decisive try.

England centre Watkins, a threat to the Catalans defence throughout, made the result safe from Rob Burrow's expertly-delayed pass and full-back Hardaker extended the winning margin in the final play of the game.