Micky Higham pulled a score back, before Louie McCarthy-Scarsbrook and Tom Makinson efforts looked to have finished off the contest.

But Kevin Penny and Chris Hill drew Wolves to within six points, only for a Travis Burns penalty to kill the game.

It marked an impressive night with the boot for Burns, who converted all of his side's five tries, and sealed a sixth win for the defending champions, who are four points above second-placed Leeds. 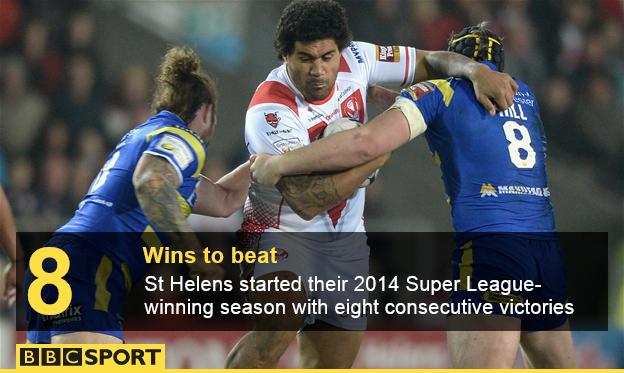 But Wolves, who will remain third no matter what happens in the other games this weekend, came so close to ruining a second 100% record in as many weeks, after inflicting a first defeat on the Rhinos six days ago.

With Saints leading 30-18 heading into the final 10 minutes, Penny scored from a Wolves charge-down, before Hill sold a dummy and jinked through with three minutes left on the clock.

It almost erased a controlled and committed performance from Saints, but they continue to go from strength to strength under Keiron Cunningham, who took over from Nathan Brown after last year's Grand Final victory.

Amid a pummelling and relentless opening, Greenwood, who later went off with a suspected broken arm, was on hand to collect a Wilkin pass to cross for the opening score.

And while Warrington had failed to exert prolonged pressure, they had threatened through a Ryan Atkins breakaway, and were level when Clark dived over from dummy-half.

The league leaders slipped into a higher gear though, scoring twice before the break.

The first had an element of fortune, with Jordan Turner getting a second attempt to kick through, after his first effort ricocheted off Penny, but Wilkin was on hand to touch down.

And the Saints skipper turned provider for Swift, by sending a superb pass out wide for an easy finish on the final tackle.

Wolves, who had won all of their last five visits to Langtree Park, began to ask questions after the break, and were within six points when Higham skipped through a gap against his former side.

McCarthy-Scarsbrook benefitted from Warrington indiscipline, putting the finishing touch to a quick penalty and Makinson had St Helens' fifth after a barnstorming break from Atelea Vea.

That sparked the Wolves comeback, but the recovery was cut short by Burns' late kick after the hooter.

"There were large points of the game where we were in control but our game management just let us down a bit at the end.

"All credit to Warrington, who came to play. If you give them opportunities, they can take them.

"But I'm happy with the result and we're still 100%. We were absolutely brilliant until that period at the end. It just goes to show how resilient this team is."

"It ended up with an exciting finish. At 30-12 down, we weren't really excited about it but my boys never gave in.

"It would have been nice to snatch it but I thought Saints deserved the spoils.

"I thought they controlled the speed of the game better than us and their goal-line defence was very good. We need to get a bit more potency in our attack."