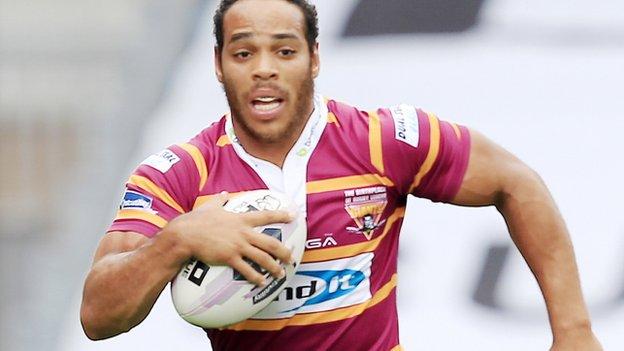 Saints' loss, on a night when they led 10-0 until having Alex Walmsley sent off, gives Castleford the chance to win the League Leaders' Shield if they beat Catalans in Perpignan on Saturday.

Huddersfield kicker Connor, deputising for the injured Danny Brough, kicked the first two of of his three conversion attempts.

And Saints centre Mark Percival was successful with two of Saints' three attempts at goal.

But Hohaia and Jordan Turner both failed with late drop-goal attempts after Cudjoe - who had never kicked a one-pointer before - had gone for victory with his ultimately match-winning 71st minute effort.

A point for Saints would have been enough to earn them the League Leaders' Shield for the first time since 2008.

Equally, a point for Huddersfield against their former coach Nathan Brown's side, would have been enough to sneak last season's table-toppers up into fourth ahead of Warrington, who went down at Wigan on Thursday night.

But, in a full-blooded contest scarred by replacement prop Walmsley's first-half dismissal for a high and late tackle on Huddersfield scrum-half Luke Robinson, neither side ever looked remotely like settling for a draw.

"I thought our attitude was outstanding. I thought Saints were good as well, they kept coming with 12 men.

"I thought our composure to keep calm was pretty good and our kicking game and kick-chase was very good.

"It's hard to hand out individual praise but Jake Connor keeps doing the good stuff. He's an immense talent, we've got a good player on our hands."

"The boys were super, to play nearly 60 minutes with 12 men. I don't think anyone can be disappointed with what they did out there tonight.

"It's certainly the best loss I've ever been involved with.

"Obviously we would have liked to have won and got the League Leaders' Shield tonight but unfortunately it wasn't to be."