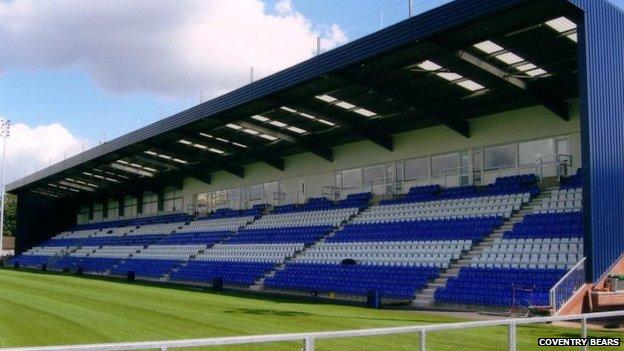 Coventry Bears have become the latest club from outside rugby league's "heartland" to be accepted into the semi-professional ranks.

The Bears, currently mid-table in National Conference League Division Three, have effectively been promoted four levels, having been invited to play in Championship One in 2015.

Their rise will increase the number of Championship One clubs next year to 10.

Coventry will play their home games at the 4,000-capacity Butts Park Arena.

They currently share their Coventry home with the city's 140-year-old rugby union club, who operate in National League One under Phil Maynard.

"We've been working closely with Phil Maynard for the last four years or so and there is a lot of transition between us."

The Bears' acceptance from the amateur ranks into the professional rugby league set-up is a major achievement for Robinson, who helped form the city's first rugby league club in 1998.

"Over the last 16 years, we've slowly developed the club for this," he told BBC Coventry & Warwickshire.

"It's a huge personal achievement for myself. I came over here to Coventry from Northern Ireland to go to university and found rugby league. And I fell in love with the sport as a player.

"Playing in the National Conference, we're the only team from outside the heartlands of the game at that level. And, basically, it's a quantum leap into the semi-professional ranks, two divisions below Super League.

"We'll be looking to recruit new players both locally and internationally and we aim to start our pre-season in November working through to the start of the season in March.

"Following on from the success of Oxford, Hemel Stags and Gloucestershire All Golds in introducing rugby league to a new audience of players and spectators, Coventry Bears will enhance the competition and the sport."