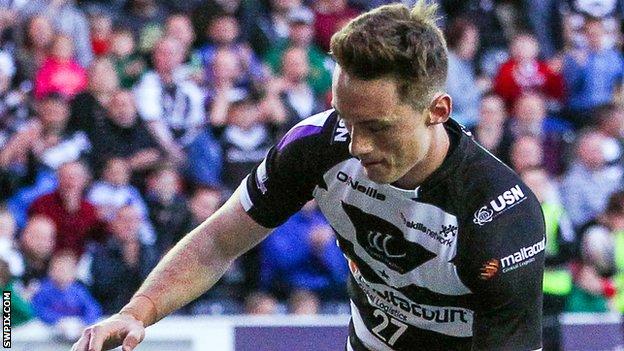 Widnes Vikings made easy progress to the Challenge Cup semi-finals with a convincing victory against Championship side Keighley Cougars.

Victory puts Widnes into their first last-four tie since 1996.

Captain Kevin Brown was an influence until his second-half replacement, while Tom Gilmore ran in a hat-trick as Widnes took advantage of extra fitness.

Part-timers Cougars were overpowered despite a brave effort and a try from Daley Williams gave them some cheer.

Denis Betts was a multiple Challenge Cup winner as a player with Wigan and has instilled the same desire to win in his current side.

The Widnes side of 1996 were the last to reach the Challenge Cup semi-finals but lost 24-14 to eventual winners St Helens at Wigan's old Central Park home.

Keighley were without head coach Paul March as he serves a two-month stadium ban and, with their Championship status in the balance, he opted for a weakened side that further tipped the balance in Widnes' favour.

Declan Hulme took just two minutes to put them ahead after Stefan Marsh made ground down the right and slipped the winger in for an easy score.

Brown burrowed in from dummy-half after Rhys Hanbury was held up, and then showed dazzling footwork and ran a terrific line through the cover for a run in from inside his own half.

Jack Owens's spectacular finish was awarded by video referee Tim Roby and the first-half scoring was finished off by Hulme's second.

Willie Isa punished a knock-on from the second-half restart to cross but Keighley got on the board when Williams scampered in on the right after a spilled ball gave them possession.

Brown's perfect kick tracked Gilmore's run for an eighth try, a scuffle ensued after a high tackle on Danny Craven and the ninth followed when Craven raced in to the left of the posts from the subsequent tap.

Hanbury teed up Gilmore's treble with an incisive run for number 10 that comfortably eased Widnes through.

"It's great to be in the semi-finals of the Challenge Cup. At the beginning of the year we said there would be no expectations, we just wanted to keep getting better and go as far as we can.

"We wanted to be on a cup run that counted and mattered, now whatever happens we're in the semi-finals and we're one game away from a massive prize.

"You've got to give a lot of credit to the players, it wasn't about the opposition, it was about the quarter finals and we went out there with a lot of purpose. It was a solid performance."

Keighley Cougars player-coach Paul March on watching the game on television from a nearby pub:

"The locals made me welcome and I had a front-row seat to watch the boys."

March on his decision to rest players:

"I thought they performed excellently. They had us on the handicap at +58 so I say that's a moral victory for us, especially with the team selection.

"They were all first-team members and it just shows how much strength in depth we've got in the team at the moment.

"I've no regrets. If you start regretting it, you question your own judgement."