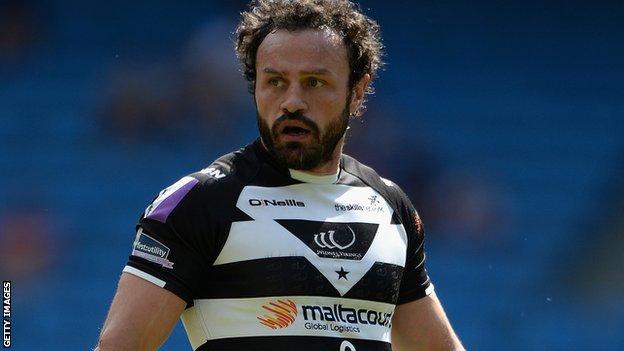 Widnes captain Jon Clarke has announced that he will retire at the end of the current season.

The 35-year-old hooker has made more than 350 appearances during a career that has also seen him play for Wigan, London Broncos and Warrington.

He is in his third season with the Vikings, having joined Widnes for their return to Super League in 2012.

"I think September or October will be the right time to call it a day," Clarke told BBC Radio Merseyside.

"It's just miles on the clock and miles on your legs. The amount of soreness you get after games and training, you just can't shake it off as you get a bit older, no matter how fit you keep yourself.

"I've had a few niggles that aren't clearing up as quickly as they should do and that plays on your mind after a little bit.

"I think this is my 18th season and I think the time's right to move on to the next chapter of my life."

Coach Denis Betts added: "He's been huge for us from the day I sat down with Jon and spoke about what we were trying to achieve.

"It was a big decision for him because he had other opportunities, but he chose to come on this journey.

"His character and influence has filtered through the whole group."

Widnes have added cover in the hooker position for next season, with Aaron Heremaia agreeing to join from Hull FC.

Clarke, who won the Challenge Cup with Warrington in 2010, is hoping to end his career on a high with Widnes.

The Vikings lie seventh in Super League and will reach the last four of this year's Challenge Cup if they beat Championship side Keighley on Thursday.