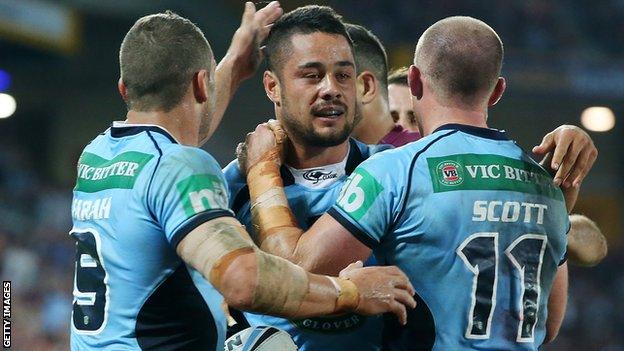 Full-back Jarryd Hayne inspired New South Wales to a first win against Queensland in Brisbane since July 2009, in the 100th State of Origin game.

Queensland, not helped by injury to star half-back Cooper Cronk, began and ended the scoring through Darius Boyd but missed conversions proved costly.

Although the Blues will be buoyed by a rare victory in enemy territory - their first opening game win in Brisbane since 2003 - Queensland have the experience of coming back from a losing start to win Origin, notably in 2013.

After an extensive build-up complete with light show and music to commemorate the century of Origin games and a couple of early big hits, Queensland hit the front.

New South Wales winger Daniel Tupou was forced into touch when fielding a Nate Myles chip kick close to the try-line and from the resulting scrum the Maroons slid left to put Boyd in at the corner.

Cronk was withdrawn with a broken arm with Daly Cherry-Evans on as an interchange in the halves, and the Maroons were on the back foot when a searing Hayne run out to the right created an overlap for Josh Morris, who had brother Brett on his shoulder to slip in for a try that levelled.

Hodkinson missed the conversion but a penalty pushed Blues ahead and the first scuffle of the game exploded when Queensland winger Brent Tate was flipped 360 degrees in the tackle by Beau Scott and Josh Reynolds, with the latter subsequently placed on report.

Blues forced consecutive scrums close to the Maroons line and Hayne spun his way through the tacklers to touch the ball down for his ninth Origin try.

Another Hodkinson two-pointer extended the lead, but Queensland rallied when Boyd romped in on the left for a second try after a slick move to the left.

Boyd was denied a hat-trick and a crucial try in the last 10 minutes by a last-ditch tackle by Brett Morris, and Hayne got to a Thurston grubber first to deny Chris McQueen a moment of glory.

Not even a last-second penalty proved any use to Mal Meninga's Maroons, as the Blues held out for a famous success.

The second match takes place in Sydney on 18 June, with a potential decider back at Suncorp on 9 July.