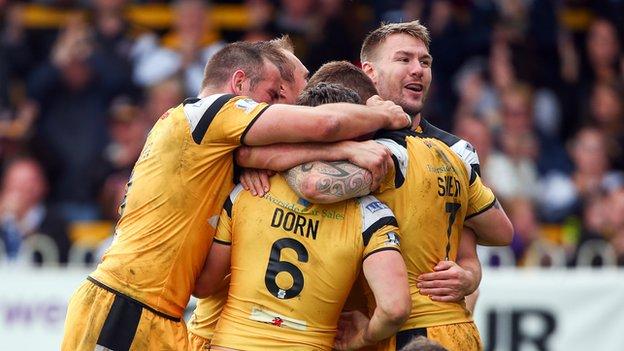 Luke Dorn claimed a hat-trick of tries as Castleford moved to within two points of the top of Super League.

Michael Channing scored two, and six other Cas players also crossed as the home side ran in 11 tries in total.

Cas's task was made easier by Rovers having Australian prop Michael Weyman sent off for dissent.

Burns converted both, while Marc Sneyd was successful with five of Cas's conversions.

Daryl Powell's men have been the surprise package this season and are showing no signs of letting up in their bid for a first Grand Final appearance.

Ahead of next weekend's Challenge Cup quarter-final, they had victory wrapped up before the break with six unanswered first-half tries on a warm afternoon in West Yorkshire.

"We played really well in the first 40 minutes. We've had some really good halves of rugby league this season, but obviously to nil a team like Hull KR is a great effort defensively.

"With the ball, we just look so vibrant at times. When we open our game up, we come up with some special things. The signs are we're improving on a weekly basis.

"Overall, it was a fantastic effort by a group of blokes who were really committed, enthusiastic and determined in everything that they were doing.

"It's tough to expect we would have won as many games as we have. As we have created a platform for ourselves, we are always reassessing where we are at and what we need to do to maintain where we are.

"Obviously Cas were red hot. They played well and we just need to make sure we stay composed. We got too frustrated out there and things went out the window so we're really disappointed.

"We have to be much better. When things go against us we really need to roll our sleeves up and defend an awful lot better than we did.

"We gave away way too many penalties and too much dropped ball. The more attack a team has on your line, these days it is harder to defend.

"It was disappointing that Michael Weyman got sent off, that's for sure. I thought it was a yellow card. I need to get some clarity on that."