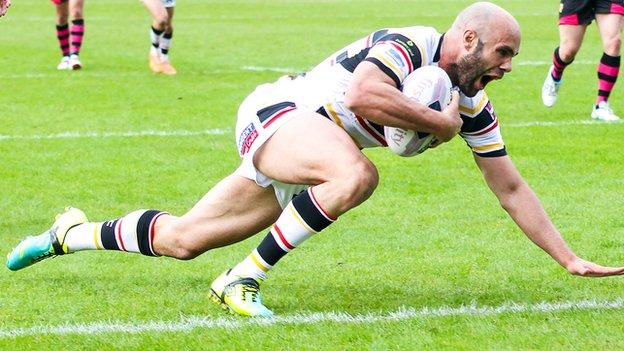 Bradford Bulls moved back into a positive points tally as they saw off local rivals Wakefield Trinity Wildcats at Odsal.

Three tries in the opening half hour, two for centre Adrian Purtell and the other from second row forward Tom Olbison, earned a 16-0 half-time lead.

Matt Ryan scored his first try for Wakefield, converted by Jarrod Sammut, early in the second half.

Bradford Bulls have appealed against their pre-season six-point deduction for going into administration at the end of January.

Gale had earlier landed two of his three conversions for an en eight-point haul with the boot.

Wakefield coach Richard Agar felt the game hinged on a couple of crucial second-half decisions when the score was still at 18-6.

Richie Mathers had a try ruled out by referee Richard Silverwood for crossing, and Agar also questioned why Bulls winger Elliot Kear was not sin-binned following a scuffle with Richard Moore which resulted in the Wildcats being reduced to 12 men for 10 minutes.

After being beaten 46-4 in Perpignan by Catalan Dragons a week ago, it was a fourth win of the campaign for the Bulls, who were hit by an early season six-point penalty for going into administration only days after beating the Wildcats in the initial fixture between the sides.

It moved them to within six points of 12th-placed Wakefield, ahead of Wednesday's appeal against their points deduction.

"I don't know all the information about the administration, so all I can do is concentrate on what I can do. If we get points back, great. If we don't, we just have to focus on the job in hand. I'm not wasting my emotions on things like that.

"My job is to get those lads in the best shape I can. I can't often say this about Odsal, but it was stinking hot and the players played the conditions well. We looked really assured.

"The second half was really tough - we didn't start great and, although Wakefield have some players missing, as have we, they still have some very good players. You could see us get a little bit edgy."

"There's not one reason on earth why Richard Silverwood should have ruled that out.

"It's ruled out for obstruction, but it was a try, no doubt about it.

"That would have pulled it back to a six-point game."