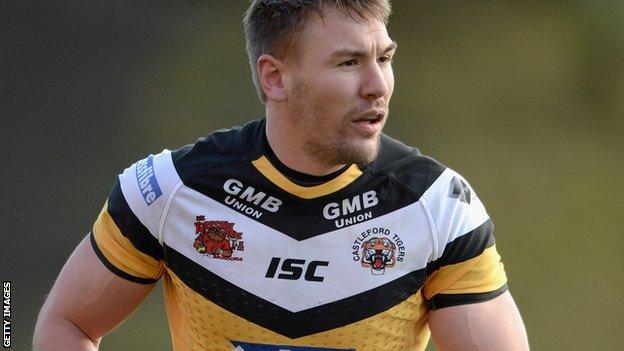 Castleford captain Michael Shenton says plans to build a new stadium has added to the feel-good factor at the club.

After a proposal for a 10,000-capacity stadium was unveiled last week, the Tigers extended their perfect start to the season with victory over Hull FC.

He told BBC's Super League Show: "There is a massive positive around the place.

"The news about the stadium sounds really positive and not something thrown out there to keep people happy - this has genuine substance behind it."

Shenton added: "Daryl [Castleford boss Daryl Powell] and the coaching staff have started it off, but players are totally buying into it - training is really enjoyable, and it is really a nice place to go to work.

"The fans are making it as well - they are turning out in massive numbers for us."

Tigers chairman Jack Fulton described the proposed £135 million development at Glasshoughton, West Yorkshire, as an "exciting opportunity" to get a home "fit for the 21st Century".

In 2010 Tigers secured land for a new stadium, but in 2012 the supermarket firm which was set to buy its ground put the move on hold, forcing Castleford to look at making improvements to their current ground.

The latest plans from Lateral Property Group, which includes a retail centre and 50-acre country park, could see Tigers move into a new stadium by the 2017 season.

In the meantime, head coach and lifelong fan Powell is determined to build on the history at their Wheldon Road home where the club has been based since 1927.

"I supported Castleford as a kid and used to enjoy coming down and watching some of the real special player that have been at this club," said Powell.

"We have our own special player at the moment, so it should be a fantastic year for us. A big part of that will be this environment and making sure we get it right on the field."

Castleford and St Helens are the only two sides to win their opening five matches this term, with Saints top of the Super League ladder on points difference alone.

"When you run out at this place and see all those people with black and amber on, it's a special place and creates a real special environment," added Powell.

"You have to make your home ground really tight and a little bit of a fortress. Home form is going to be hugely important for us.

"We want team to come her and find life difficult and your own team to feel that it is something special and I think this place is."