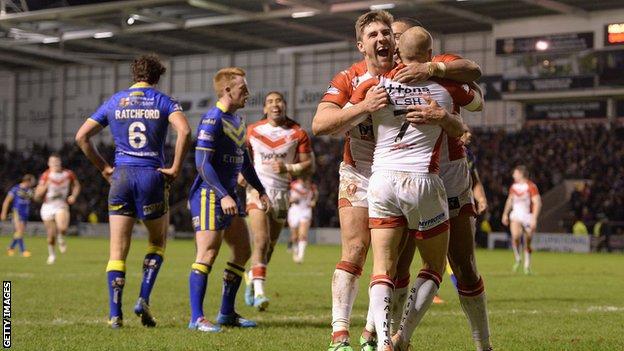 St Helens head coach Nathan Brown believes the character in his squad is the main reason for their perfect start to the new Super League season.

Saints beat Catalan Dragons 40-22 to make it five wins out of five so far.

"The club has a terrific culture and I'm very lucky to be a coach of it and inherit that.

"The boys' spirit is good and we're obviously a club that is playing reasonably well at the moment," Brown told BBC Radio Merseyside.

"When you're doing that you can make a real fist of these things and you can knuckle down to get a result."

But they have not lifted any silverware since 2008, when they beat Hull FC in the Challenge Cup final.

Saints finished fifth in last year's Super League table at the end of the regular season, but were beaten in the play-offs by Leeds Rhinos.

The squad was strengthened in the close season and 40-year-old Brown now has some of the form backs in the league at his disposal, with new signing Luke Walsh impressing, as well as wings Tommy Makinson and Adam Swift, who both scored against Catalan, and full-back Jonny Lomax.

"On any given week, if it's not Tommy, it's Swifty. Between the two of them they're coming up with something," Brown added.

"But I thought Jonny Lomax was by far the best player on the field [against Catalans].

"We had a lot of people who worked hard for us, but Jonny had the touch of class and I think he passed for three or four tries, which is a super effort."