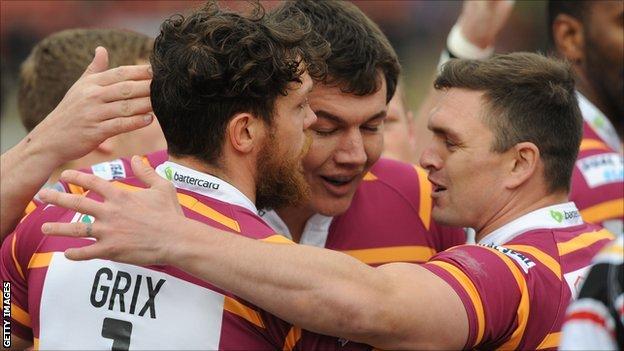 Huddersfield led 32-6 at the break through a brace of tries from Scott Grix and one for Joe Wardle, Michael Lawrence, Luke Robinson and Jason Chan.

It began badly for the Bulls when Tom Olbison knocked on from Brough's kick-off, enabling Grix to score his first try from his side's first set of tackles.

However, the visitors' defence could not re-group in time to prevent Henry scoring the first of his two tries.

Jamie Foster's conversion put Bradford 6-4 ahead but that was as good as it got for Francis Cummins's men.

Former Bradford centre Wardle took Brough's pass to stretch out for Huddersfield's second try on 16 minutes and the Giants cut loose in the second quarter with four more tries before the break.

The best try was scored by Robinson, who finished off a 60-metre move sparked by hooker Kyle Wood's break down the middle, while second rower Chan went through a yawning gap for his first try of the season.

The Bulls pulled a try back early in the second half through Henry but Huddersfield responded with three more in a 10-minute spell.

Brough and Robinson combined to get substitute Ta'ai over by the posts before Ferres crafted a second try for Wardle and right winger McGillvary used an overlap to register his side's ninth.

Bradford's replacement hooker O'Brien took a tap penalty to force his way over from close range and Foster kicked a third goal.

But it was all very predictable as Ta'ai bulldozed his way over for his second try, as Ferres deservedly got on the scoresheet when the Bulls failed to clear the danger caused by Grix's kick and McGillvary exposed another chink in the Bradford defence to grab his second.

Bradford coach Francis Cummins: "The lads' effort was great but, if you are going to go into a game with two props, especially against a team of literal Giants, then it's going to be a tough day.

"They had more forwards on the bench than we did in our entire team. That meant our outside backs to do some extra work.

"We needed to be smarter but we were always going to struggle with the personnel.

"It's tough at the moment but I'm really confident about those players, the people around the club and the supporters. We're going to be okay. We need someone to take over this club and hopefully give us a little bit of back-up.

"It sounds like there's a few consortiums in there."

"We were just happy to get the win.

"At times it was very slow and there was no ruck speed.

"Both teams fell down to a really slow level and we made four changes with 60 minutes gone. The whole speed of the game wasn't great but I thought we turned up at times.

"We were scrappy but we got through the game and obviously the scoreboard showed that."